A look at the February 1994 issue of British C64 magazine, Commodore Format. 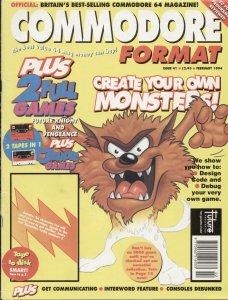 The Winter Games were held in Lillehammer, Norway in February 1994 and tangential as that might sound it’s as surefire a sign as any of the C64’s consignment to commercial history by this point. It was the first time in a decade that there wasn’t a spin off game on the Commodore.

CF had been managing its readers’ expectations well and preparing for this moment: this was the first issue of Commodore Format without any games to review. It was extraordinarily well handled and didn’t even mention the fact, flagging up so many other things you could do with your machine this winter. Another powerful front cover invited readers to follow the instructions and design, code and debug their own games. You started with the Rowlands’ boys (they of Mayhem fame) who, each month, took you through the planning stages of a game from the inspiration to recognising the C64’s limits; basically, everything you do before you turn on your computer. Then it was over to Paul Black for the hard stuff (using CF‘s own software from the previous months), and Jason Finch took care of everything else – including answering any questions. If you’re one of the many people interested in learning to code the C64 in modern times, it’s really worth having a look through Commodore Format from issue 39 onwards – over the course of a year, the tutorials pretty much add up to an incredible “how to”, and they’re minus the dry feel of any books you might find. 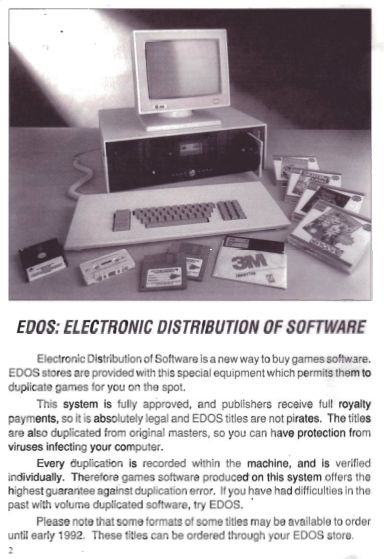 It wasn’t all getting your hands dirty, though. This month came the news of John Menzies’ EDOS system (Electronic Distribution Of Software). Each store had an ATM sized terminal on which were crammed hundreds of games from software companies’ back catalogues. You selected your game, and bonza – it was dubbed off to tape for you there and then. CF took a look at 25 of the best in February 1994 (even if the contents page said 50), and they were doozies: E-Motion, Monty Python, Head Over Heels and RBI2 were just four offerings available for a few pounds. Everyone was a winner really: the units took up precious little floor space yet allowed kids access to hundreds of games, but as CF said the success and sustainability did depend on kids actually using it. Over the next year, we’d see.

Other than that, it’s another really nice mix of features this time around. As we’ve said in previous instalments of this series, CF had moved towards being what we’d now know as a knowledge mag, heavy on tips and features. The Beg, Borrow, Steal piece tracing the origins of videogames to the present day looks old hat now, but nobody had done it in 1994. Neither, when you think about it, had a magazine properly delved under the bonnet of the Commodore like in Chip Off The Old Block. And the comms section was back and more meaty this month, too, with a look at the bulletin board MicroNet. “Free software”, wrote Simon Forrester. “Even snuggled here on page 36 I’ll happily bet any reader that those two words have physically increased the magazine’s sales over a certain other title”.

He was making a rare reference there to rival Commodore Force, which we’ll come to some more in a few months’ time. It was once known as the mighty ZZAP! 64, a groundbreaking magazine from the mid ’80s that at its peak was arguably the best of its genre ever. By the ’90s, though, as Commodore Force, its small team and limited resources had been unable to adapt to a changing C64 landscape. “I just didn’t have sufficient experience or knowledge, and the gradual hemorrhaging of staff didn’t help”, said editor James Price back in 2005. “It was a struggle to put each issue together, hence the number of meaningless retrospective pieces. If so much was happening in the off-the-radar C64 world, why was no one getting in touch? Lacking internet access – we didn’t even have email at [publishers] Impact – how could we find out? I’ll gladly hold my hands up in a “mea culpa” style and admit the absence of such content was ultimately my fault, but I really can’t see how a small and inexperienced team could have done more.”

It wasn’t just the range of content and resources CF beat Force on, though. Bluntly, in these dying months, it was attitude. Force told its readers this month that as far as 1994 was concerned, “sadly, it didn’t look like much”.  Commodore Format refused to wave the white flag and saw the C64 as entering a new era. It made people feel good about using the machine. And that, over 25 years since its first issue, is why we still talk about it so fondly today. CF 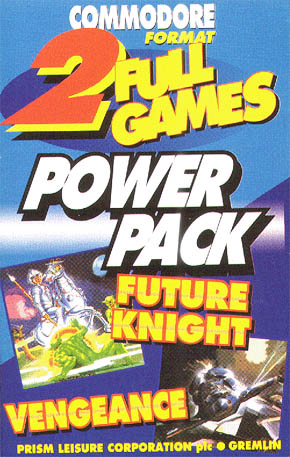 At the risk of ending on a downer, this was a pretty weak offering: just two games, supposedly from the vault marked “classic” but actually nothing of the sort. Vengeance was a pedestrian shoot ’em up dating back to 1987, and Future Knight an even older (’86) and thoroughly uninspiring platform adventure set in space. Just to top things off, the instruction pages mix up the two titles. D’oh!

Usually, such a thin offering would be padded with a wad of copyright free PD – but perhaps with CF in court this month for copyright issues arising from issue 38’s tape, caution was temporarily being played.