A look at the May 1994 issue of British C64 magazine, Commodore Format.

There is a lot to love about Commodore Format 44, but let’s start with the headline: Dave Golder was back, replacing Hutch as editor and into the job he’d expected to get the previous year (read more about that bout of handbags in our chat with him here. Note that Dave also continued to edit Amstrad Action, and from this point on CF would share an editor until the end). Under Dave, the mag would enjoy one final massive upswing in its fortunes. It’s all about narrative – and Dave’s was to suggest that there’d been a “games explosion” from Europe, with many dozens of titles imminent. No such explosive event had actually occurred between the last issue of CF and this one mere weeks later; it’s just that Dave decided to majorly focus on European games which had been there all along but the magazine had, to date, pretty much ignored. So, not new games at all – just new to us, and with some willing C64 fanboys as UK distributors.

MAY THE 44TH BE WITH YOU

As such, the mag began to swing back to something not dissimilar to Trenton Webb’s version of CF: “A lot of the credit for that should go to [staff writer] Simon Forrester who pushed me in that direction and did a lot of the legwork”, Dave told us. “And, if I remember correctly, a lot of the games creators approached us. So we weren’t globetrotting heroes, but we were heroically receptive to good ideas. But yeah, there was a bit of virtual legwork to be done as well. We did it because we cared. In those days at Future – unlike now – if your mag went under, you were pretty much assured they would find you another job, so we weren’t doing it just to make sure we were employed. We cared.”

And it really, really shows this month. There’s a lead games review for the first time in a long time: Penguin Tower, which we mentioned last time around, notched up 90% and it got a proper double page spread just like in the (sniff) good old days. The nifty Bomberman clone came from Finland, and a deal was eventually struck with Jon Wells’ Visualize label to distribute it. Sadly, after some 700 pre-order coupons were received, the author never got around to the finishing touches and – almost 25 years later – still hasn’t! We live in hope of a release, though – Games That Weren’t have more on a tragically lost game here.

The other software of note in May 1994 is Time Crystal. Parallel Logic software had been set up by two CF readers in response to January’s famous “call to arms” piece, and was one of a handful of releases planned: it’s actually a fairly decent 3D adventure crippled only by the fact that the C64 was never much cop at these games (it’s sooooo slow), and the 45% score is a reflection of that. Decent effort, though.

There was still room for the DIY stuff that had made Hutch’s Commodore Format so distinctive, and this month’s brilliant Mayhem cover flagged up a music tutorial from Apex Computer Productions. It tied in to a fantastic bit of software on the Power Pack (more of which below) that allowed you to enjoy tunes from Creatures 2, Mayhem   and every other creation from the boys. Neat.

But it’s the sense of optimism for every C64 owner’s true love this month (games!) that prevails. For the first time in ages there’s even a proper previews section, and Snippets confirms what had been suspected in Commodore land for some time: Electric Boys were working on a Commodore 64 version of the iconic 16-bit game Flashback. We’ll come back to that next time, but this – combined with the start of a new Diary Of A Game from Jon Wells, who took readers through the early stages of his beat ’em up Tenth Dan, couldn’t help but make you feel brilliant about the coming months. As we say, it’s all about narrative: nothing had dramatically changed, it’s just that Dave Golder tipped the focus to make everybody think that way. It’d taken a while for him to get his deserved place in the editor’s chair, but it had been worth the wait. CF

It’s fair to say a few tapes of late hadn’t been totally brilliant as the mag’s budget decreased and deals with the likes of Hewson expired (Future bought the majority of their decent C64 stuff when they went bust; by 1994, they’d pretty much given away the lot). Now, though, we began to see the fruits of new deals with the likes of Codemasters and Zeppelin. The latter’s Carnage was pride of place on May ’94’s tape: it was a neat top down racer not unlike Slicks, and had been released a full retail just a year earlier and notching up 73% in ish 30.

The tape was completed with Mayem’s Mega Music Mix, a totally new piece of software that allowed you to muck about with Apex Computer Production’s work and tied into the music tutorial on the cover. So just the two items this time around, but great stuff and a fantastic value package – Carnage was still out there at retail priced more than the price of CF on its own, after all. The full tape pages are here.

D’OH! OF THE MONTH

It really is a brilliant front cover this month (have a look at the top of this page again): Mayhem gets his second ever front page of CF, a feat matched only by, er, Hulk Hogan. It was missing the magazine’s price, though (it should be just under the masthead) and so every copy came stickered instead – a collector’s nightmare! It also meant the mag was a few days late onto the shelves.

…AND ONE MORE THING

The computer press at large reported Commodore’s decision to finally discontinue the C64 this month, though CF chose not to report it – presumably on the grounds of morale. Interestingly, the computer itself was still both in demand in some markets and profitable. It was the disk drive that was the expense, and made the whole thing a loss. Amiga Format reported it in May ’94 thus: (Sniff! – Ed) 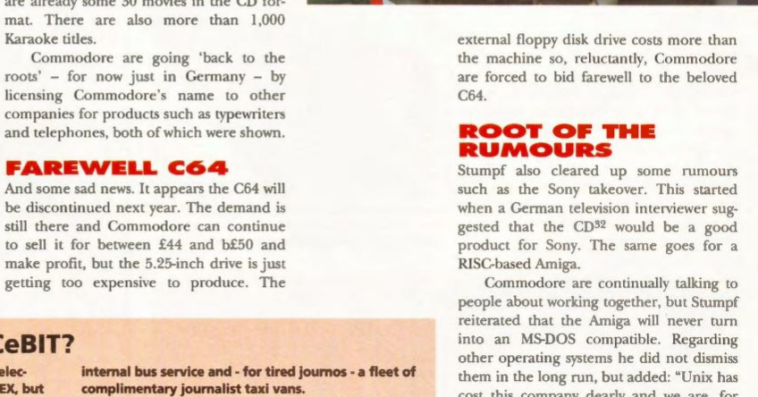