Skip to content
Commodore 64 fan clubs from the ’90s

Back in the 90’s when Global Hypercolor was the national uniform and Hooch was mandatory, software houses had fans in their own right. Collectors would snap up every single release from their favourite publisher – something which is still going on today. In the first of a three part series, Commodore Format takes a look at the softies who were so popular they had their own fan clubs.

WHO? The Codies were formed in 1986 by brothers Richard and David Darling. They did so with the help of their Dad Jim. He’d been a contact lens pioneer, of all things, and that work took the brothers and their five other siblings across three continents and fourteen schools in an unsettled – if hugely privileged – childhood.

It was in 1970’s Canada that the boys knocked up a text version of Dungeons and Dragons on a Commodore PET; when they returned to the UK in the early 80’s they were earning more money than their father by selling homegrown stuff in the small ads of Popular Computing Weekly (one repeatedly quoted figure is that they had trousered over £200,000 by their mid teens). Jim became their manager, and in 1982 – with Richard 15 and David aged 16 – they formed Galactic Software, flogging stuff like The Last V8 to Mastertronic and eventually owning 50% of the company. Codemasters was set up so they could cut out the middleman entirely, quickly becoming famous for its budget games: earlier C64 fans will remember them for “simulating” (generous – Ed) almost everything, from BMX Simulator to Jet Bike Simulator and even Fruit Machine Simulator.

Codemasters’ most celebrated game series, though, isn’t the brothers’ creation. They had a deal to publish the work of The Oliver Twins, the teenage boys behind the Dizzy games. The eggy adventurer needs no introduction to anybody this far deep into a Commodore Format website, but the Oliver Twins’ part in the Codies’ success can still be overlooked. Get this: at one point in 1986, 7% of all games sales in the UK – around 3 million – were programmed by them.

As the games industry moved on and Codemasters themselves started messing about with stuff like the NES, they nonetheless remained true to the Commodore. CJ’s Elephant Antics, Stuntman Seymour, DJ Puff and Spike In Transylvania all appeared between 1991 and 1993. It’s these good-natured, colourful games which younger ’64 fans fell in love with: at the early 90’s budget price of £3.99, high quality cartoon adventures were within pocket money reach. More importantly, the Codies never forgot who their audience was: the pattern learning, repetition and gentle learning curve in stuff like Dizzy was pitch perfect for younger gamers who wanted a challenge but also to succeed.

ANORAK CORNER It’s no accident that the brothers were well known back in the day. The “whizzkid programmers turned company directors” thing was carefully crafted by Codemasters’ operations director Bruce Everiss, who set up stacks of interviews to craft the narrative. “People identify with people, not products”, Bruce told the Retro Hour podcast earlier this year.

THE FAN CLUB The Codemasters Cartoon Time Club was initially set up to try and cash in on the most obviously marketable character, Dizzy. The idea was you’d write in and they’d send a “newsletter” back which, in fact, was mainly a catalogue of merch. Clocks! Trading cards! Bags! Hats! Mugs! Look at what you could’ve won:

Soon, though, the club was ramped up a bit. By collecting five tokens (one in every Codemasters’ game), you could send off to join. In return you got a Codies game for free, a handwritten certificate and an occasional newsletter. It was run by Claire Lucas, the same woman who’s wearing all the Dizzy tat in every photo – and you actually had to put her name on the envelope when you joined to make sure it got to her desk. Different times, eh?

WHAT HAPPENED TO THEM? Codemasters co-developed the Game Genie, a game modification device for Nintendo’s NES which “modified” games (ie let you cheat). It was the fifth best selling toy in America at Christmas 1991, even though it angered Nintendo who got quite court-y about it. They’ve stayed on the international stage ever since across pretty much every format. These days, they’re known for stuff like Colin McRae Rally and Operation Flashpoint, but the brothers aren’t involved now: they sold out in 2007, netting eighty million quid. The brothers received CBEs for services to the computer games industry the next year. In 2011, David founded Kwalee to make games for iOS and Android. And the quieter brother, Richard? Direct from the man himself, he’s “retired and enjoying life.”

WHO? Perhaps it’s because Zeppelin were late to the game, who knows. But for a company that produced over 50 games for the Commodore 64 between 1988 and 1993, the Newcastle(ish, depending on the year) software house never gets the hat tip it really deserves – especially for being one of the last C64 publishers standing back in the day.

Brian Jobling wrote a copying program that let you flawlessly pirate cassette games when he was just 14. It was so impressive and notorious that the industry sat up: one wise old head took Brian to one side and said he could probably use his cracking capabilities to make a load of cash. How? By crossing over to the other side and making protection systems for the UK’s cassette publishers. That’s what Brian did, and three years later he bought a Porsche. He was 17.

After a stint at Tynesoft, Brian founded Zeppelin with fellow coder Derek Brewster and Martin O’Donnell on November 8th, 1987. They took the name from their favourite 70’s band, but used the word’s airship origins for a logo. Early stuff like the shooter Zybex (a ZZAP! silver medal winner) and platform adventure Draconus secured them a rep for high quality stuff at budget prices early doors. A year or so after founding, Derek and Martin left: Brian’s brother Darren partnered up full-time after giving up on his dream of being a dentist (“the dissection lab changed my mind”, he told the NE Times in 2016), and the next few years spawned hit after hit. There was Kenny Dalglish Soccer Manager, platform favourite Blinky’s Scary School and a full-price label – Impulze – that licensed mohawked irritant Edd The Duck, a Match of the Day football game featuring the C64’s only digitised Des Lynam and a Paperboy inspired interpretation of Aussie soap opera Neighbours.

As the market deserted the Commodore in late ’91 and ’92, Zeppelin stood firm: Arnie was Chris Butler’s surprise swan song (everyone thought he was done with Turbocharge, but he’d been messing around with this neat little shooter for years). It was the hit of 1992. Amazingly, the Zeps (oh this is what we’re calling them four paragraphs in is it? Why don’t you just marry them? – Ed) cracked on with top down racer Carnage and – in mid ’93 – an Arnie sequel. In April 1993 alone, they released one C64 game every week (Fist Fighter, that Arnie 2 thing, International Truck Racing and World Championship Squash).

ANORAK CORNER If you’re to believe Commodore Format‘s feature in ish 31 which praised Zeppelin for “churning out C64 games like the Aussies churn out soap operas”, Brian was the youngest self-made millionaire in the UK at the time. He was 20 years and 7 months old when the bank balance reached seven figures.

GAMES TO PLAY The first Arnie, for sure. Round The Bend, a platformer based on the tea-time kids’ show, is good fun and doesn’t get much of a look-in. And for a real treat, hunt down the unusual and prankish Sleepwalker (there are a few games with this name, but we mean this one). Don’t forget the great looking but super hard Bod Squad, either – it has a back story we investigated here.

THE FAN CLUB Zeppelin’s Air Crew Club set you back an eye watering £7.99, but you got two “free” games when you joined (we know, we know – Ed). There was a shiny membership card that you could use for discounts, a certificate with your own “crew” number and a decent magazine called Air Crew. It was illustrated by a couple of the guys who did Viz, which had North East offices near to Zeppelin’s. The mag’s cast of characters included a crazy old blimp pilot and a hapless air attendant. They dished out hints, tips and games news and even matched you up with a pen pal. Zeppelin used to reveal their new games here first so it was essential for hardcore gamers. The Viz art has also made the newsletter much sought after by collectors, but we’re yet to see one in the wild. Apparently, they were always in a garish shade of red or green. Have you got one?

WHAT HAPPENED TO THEM? The 8-bit games only stopped in ’94 when Zeppelin was bought by American company Merit Studios. Two years later, they became Eutechnyx and the brothers bought the company back. Stuff like Cartoon Network Racing, Pimp My Ride and Nascar ’15 have appeared over the subsequent years and across pretty much every format, as the company focused on race games and, occasionally, business software. Darren Jobling started a company called ZeroLight in 2014, which helps posh people buy even posher cars. He carries a card around with him with his goals for the year ahead, apparently (oh, have a Cornetto Darren – Ed).

To end part one of this series, then, a slightly stranger club. When we started writing this feature we had it in mind that “fan clubs” (we’re doing air quotes here – Ed) were actually a way for softies to get information about their customers in a pre internet age (and, indeed, they all promised to “add you to our database”). The more you dig, though, the more you realise these things were really about flogging merch. Sometimes they charged kids for not much more than a photocopied certificate and a catalogue. There were brilliant exceptions, though.

You’ll know James Pond, of course: the original platformer never made it to C64, but the sequel Robocod did. It’s a divisive conversion, and its washed out appearance (a result of graphics being directly ported over from the Amiga) does mean it loses some of its character. But the pun-laden platformer, which sees you extending The Cod’s body across many screens to reach his platform destinations, was a big seller across the Amiga, ST, ’64 and consoles. T-shirts and mugs followed, before publishers Millenium set up a “secret society” called F.I.5.H. which was wonderfully executed: 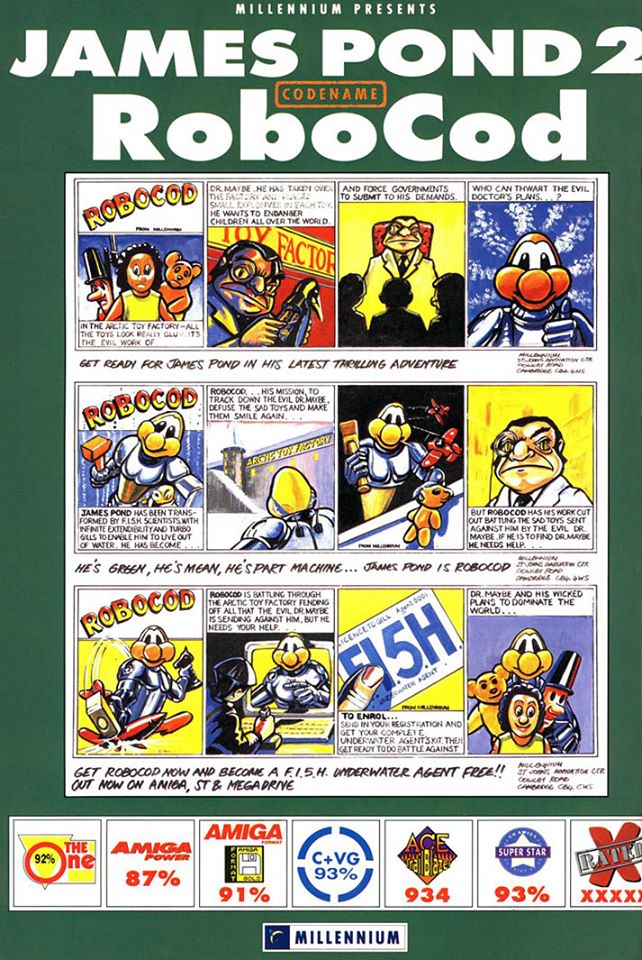 To become an “agent”, kids had to send off to a mysterious PO Box in Cambridge for a “job application form”. Once accepted into the secret spy society (and after Millenium had collected £8.95), you were sent a huge dossier of James Pond branded documents. There was a board game, a “secret code decoding” ruler for your school pencil case, loads of stickers and a regular letter full of “offishal secrets”. Best of all were the regular missions you were sent in the post, often of the pen and paper puzzle variety (you had to use that ruler). If you were one of the first few people to crack the thing, you got a prize. Of what? A James Pond sweatshirt too big for any child, of course. CF