Oh, boy. This part of the site’s bound to start a few wars, such is its subjective nature. But we thought it was about time to start looking at Power Packs in a bit more detail after our feature. There are hundreds of games, utilities and cute little moments like loaders and jokes on the boxes to choose from – but we’ll start with five really powerful “wow” moments and come back with five more in a few weeks. Let us know your faves on the socials, too, or in the comments below. They don’t have to be the best games – just things that really stick out for you! Need to jog your memory? Every box is here, and every issue with instructions is here. 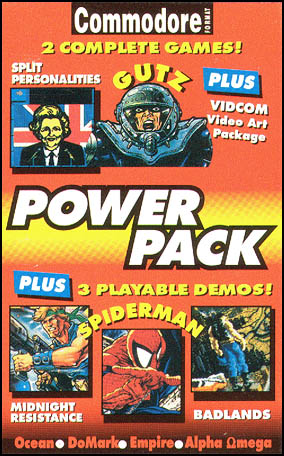 Issues 1 and 2 of Commodore Format had featured a boxless cassette called CF Smash Hits. Though the first ish had included Simon Pick’s unreleased Revolution – for which Future Publishing had unusually handed over £2000 – it wasn’t until the magazine’s third installment that the covertape really took front and centre stage.

Issue 3 saw the tape renamed the Power Pack to avoid a run-in with Smash Hits publishers EMAP. It was also given its own plastic box for the first time, making the tapes instantly more collectible. But it’s the range offered by the third cassette which sees it feature in our list. Power Pack 3 leads with Domark’s classic tile puzzler Split Personalities which has you shuffling blocks to create the faces of politicians of the age. For something more frantic, Ocean’s Gutz drops you into the gooey innards of some kind of monster. Your task is to destroy its major organs, set to possibly the most irritating, looped soundtrack of all time (you’re hearing it now, aren’t you? And for the rest of the day. FFS – Ed).

There’s also a complete art package – Vidcom 64 – which was so powerful and useful that CF offered a complex manual via post (“we haven’t got room for 4000 words here”). A tedious, silent preview of Domark’s Spiderman is probably the weakest showing here, and there’s a peek at the so-so Badlands too – but the tape redeems itself with one of the most fondly remembered demos of all time: the entire first stage of Ocean’s Midnight Resistance. It’s the spine-tingling music, the waves of enemies, and the ability to stock up with badass weapons and go on the rampage over and over again…everyone loved this rare chance to play a big chunk of a premium game for free.

Two full games, three demos AND an art package that was still selling at retail – all on the front of a £1.95 magazine. Mental!

PACK FACT: To get Midnight Resistance onto the tape, Ocean gave CF the game Gutz for free. This sort of trade-off was very common in the early days.

One of the recurring themes on this website is that Commodore Format was read primarily by what we’ve started calling the “C64C” generation; those kids who got a Commodore when it became super cheap, or inherited it from a brother. Those same gamers missed out on a sackload of brilliant earlier releases, which Future Publishing well knew – so they started buying them up and re-releasing them via Commodore Format. Tennis ball bouncing platform sort of thing (nice – Ed) Bounder had been retailing for eight quid on the Gremlin label just a few years earlier yet here it was in full as CF‘s Christmas 1990 “present”. The mag even printed a level guide in the same issue for what was a tough little game to crack, and followed up with the sequel Rebounder on issue 30.

PACK FACT: Bounder is bouncing back in 2018. Check out our exclusive chat and have a look at some early video!

POWER PACK 7: THE BEST VALUE FOR MONEY EVER?

We all remember the lines from magazine covers back in the day. “FULL GAMES! LOADS OF THEM!”, they’d scream, but even as a 12-year-old you knew they were probably mainly going to be a bit lame. Commodore Format 7 was the first Power Pack without any demos, and “FOUR FULL GAMES” made one nervous on first reading. But, erm, what’s this? Andrew Braybrook’s Uridium? The thoughtful, complex, astoundingly well-programmed science fiction shooter Uridium? Blimey. It overshadowed, somewhat unfairly, the full version of Blue Max on side two. You’re in a bi-plane for this lovely little isometric shooter, regularly having to land and refuel before going off and bombing the bejesus out of everything all over again. It’s very simple but it’s got incredible charm. 3D-platformer-in-space Crystal Castles was next, and the tape was completed by 5th Gear, an overhead racer from Hewson. In years gone by, a magazine might’ve carried Uridium alone as a special event. All of these titles could have been placed across four consecutive months and been the sole star attraction; to place them together was a huge statement. For many, it’s the best tape ever.

PACK FACT: 5th Gear kept crashing for a variety of reasons, particularly if you had the audacity to press stop on the tape. A new, fixed version was included on Power Pack 28.

Creatures 2 had been anticipated for over a year. It was an unusual offering and difficult to demo; by providing one of its main levels (or “torture screens”) Thalamus were essentially giving away a quarter of the game. Instead, programmers John and Steve Rowlands served up a festive sub section which saw you saving fuzzy wuzzies from being thrown off a cliff edge (it’s tasteful stuff, this game – Ed) outside the Commodore Format office. It wasn’t just the unusual and cute setting which makes this so memorable, though. It was also the first occasion – just in time for Christmas! – that the boys showed off their famous snow graphics. Everything takes place amid a flurry of the white stuff, and the effect is hypnotic. It also means that a fuzzy wuzzy’s bright red, bloody end looks even more gruesome!

PACK FACT: Everybody wanted to know how the snow effect was achieved. Jason Finch put together a listing in issue 25 which is really useful. It’s also why a lot of PD games from around 1992 suddenly featured snow drifts! The code’s here.

POWER PACK 17: THE ONE WITH A GOOD PD GAME 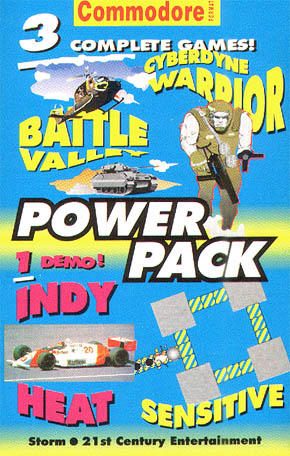 Back in the day, public domain software was much like the home brew scene is now: a lot of enthusiasm but very little quality (we know there are some gems but there is a lot more dross, so please don’t write in! – Ed) . Dave Golder joined Commodore Format for ish 17 from Public Domain magazine, and his first column in CF was on that very topic. To accompany it was the stereotype-busting tile puzzler Sensitive. It’s ace. You control a little blob, your task being to remove every tile on the screen. The problem is that your tiles explode seconds after touching them and you can’t go back; the puzzle element is working out a safe route to clear each tile. It’s addictive stuff with a grand soundtrack, and as this was the cracked PD version you even got a trainer for infinite lives. Naughty, but it did make the thing more playable!

PACK FACT: Er, it wasn’t CF‘s fault but it turned out that Sensitive wasn’t PD at all. It had been written for a German mag’s coverdisk and – as was often the case – illegally put into one library, where it inevitably spread. Sort of PD even if it didn’t want to be, then. CF