Skip to content
GAMES OF THE ’90S: Midnight Resistance

GAMES OF THE ’90S: Midnight Resistance

A look at the C64 conversion of the arcade game Midnight Resistance.

One of the C64’s most popular run ‘n’ guns actually has its roots in Japan. Back in 1989, it appeared in Japanese arcades as ミッドナイトレジスタンス – Middonaito Rejisutansu – and quickly ate up quarters and ten pence pieces in the US and UK. It become so iconic it has a cameo in the Robocop 2 movie: during an interrogation scene, a corrupt officer has his face repeatedly smashed into a branded cabinet.

The plot’s actually unusually thoughtful for the era, casting you as the member of a resistance movement attempting to rescue your family from a drug kingpin. In reality, none of that’s important once you hit fire and begin your rampage. This is bloody, multi-directional violence at its 8-bit peak! On the first level you simply run right, firing at anyone in your path. Some of your enemies will drop keys, which can be used at a weapons storage unit for greater fire power. Hold on to every key and homing missiles, flamethrowers and three-ways (er, “three-way” meant something different in 1990 – Ed) are yours! 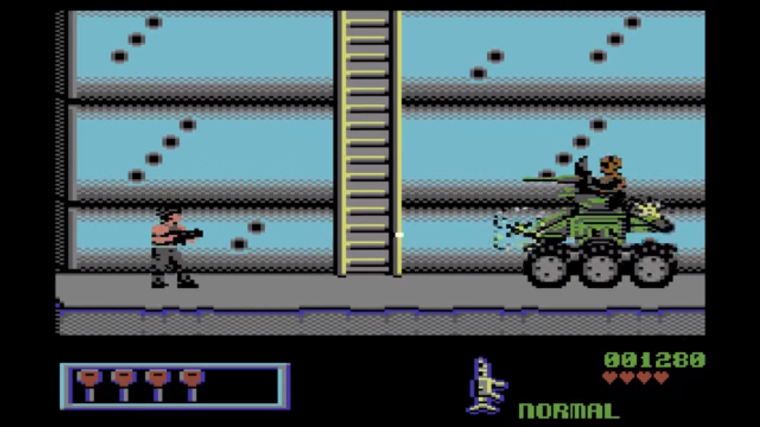 The game’s relatively gentle opening stage quickly melts away into a frenzy of swooping helicopters, reinforced tanks and devastating jet planes. Enemies leap from every direction and you end up climbing, jumping and dashing in each one too. A thumping set of SID tunes gives the devastation a heart pumping intensity rarely seen on the Commodore 64. The opening, crashing bars of level one’s soundtrack jolt you into action: this is a mise en scene we normally associate with much more modern software. This game will give you palpitations! But don’t take our word for it. Here it is in all of its magnificent glory:

The C64 version of the game was produced for Ocean Software by Liverpool’s Special FX, famed for their classy, technically wonderful conversions of stuff like The Untouchables and Batman. The guys were sent a briefcase with the arcade board inside set to free play: they had to reach the end and literally copy what they saw for the Commodore. The game was delayed when programmer Robert Tinman was called over to work on stuff for the Nintendo; in the end, the whole thing was produced in 8 weeks. “Memory wasn’t a problem”, remembers Robert. “It’s a multi-load for each section. Time and the amount of players on screen was the problem, that’s why it’s a one-player only – to keep it at a respectable speed.”

SO HOW DOES IT LOOK?

Bloody marvelous, frankly. It’s difficult to say exactly why an essentially simple shooter is so notable, but there’s something about it. Most games of the ilk simply have you on rails from left-to-right, so Midnight Resistance‘ ability to let you chuck lead right-to-left, up and down and then up again gives you a feeling of adventure you rarely experience on the C64. Then there’s the range of enemies: shooting “men” is one thing, but selecting the right weapon to bring down a helicopter is quite another. And, yes, there’s that beefy soundtrack which makes even the Amiga’s pan pipe effort sound weedy. Everything about this conversion is big. We wrote about Midnight Resistance for Bitmap Books’ C64 Visual Commpendium in 2016 and noted that when you see the game running on a Speccy or CPC – all monochrome and mute – it actually does something you might previously have thought impossible: you love the Commodore 64 even more. 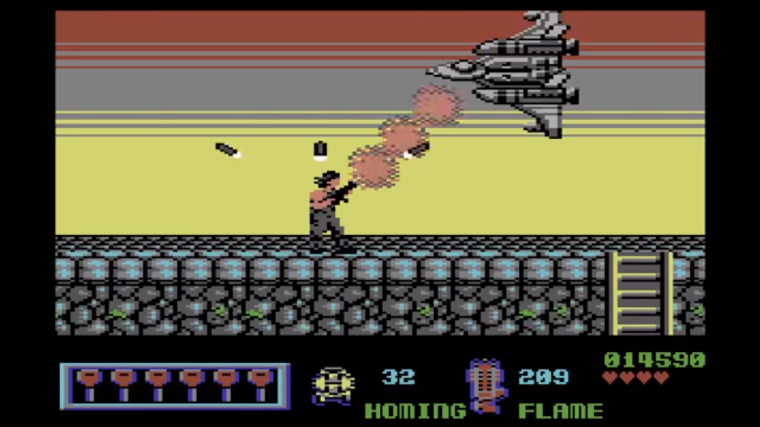 Commodore Format agreed with Ocean to give its readers a level 1 demo of Midnight Resistance in exchange for the non-exclusive rights to 1988’s Gutz. They both appeared on issue 3’s tape, which was the first to be called a Power Pack and come with a box (more on that here). It is remembered fondly by readers, probably because it was a rare chance to play a bit of full priced software. But it’s also the first time a lot of people ever saw Commodore Format: having established itself, issue 3 was the first to be available in every part of the UK, so it’s no wonder it evokes such warmth:

Andrew Fozzy Foster One of my all time favourite games….. Beautiful, responsive controls and fire mechanics meant we had a run ‘n’ gun we could actually play without chucking your Cheetah Bug out of the window!

Stevie Aaron Brilliant arcade conversion. Nailed all the important aspects bar two players and the joystick control method (neither of which would have worked well on the C64). Glorious recreations of the arcade tunes also and in mostly the correct order unlike on the Speccy (dunno what happened there).

Jamie Fuller Remember playing this demo to DEATH! Being the little brother though I often got stuck on “smart bomb” duties (tapping the space bar)

Frank Gasking I didn’t get to play the issue 3 demo. It was in a secondhand shop when someone was selling their 1541-II and Night Moves pack, and demoed Midnight Resistance to show it all working. Saw this guy play through the first level and knew I had to get this game.

Had some Christmas money left over and remember rushing down to John Menzies and hoping they had it in, and luckily they had the full price version there. I remember CF later reviewed it on budget and gave something like 43%, and I was about to write an angry letter in or something like that

😉 … they had actually cocked up and copied one of the other scores for it.

Carl John Brookes I need this back I loved it. PS4 release ?

CF‘s issue 2 review bears the hallmarks of a game that came in very late in the magazine’s production process; the importance of an exclusive review clearly trumped the need for CF‘s trademark range of screenshots, explanatory diagrams and walkthroughs. Only level 1 is actually shown,  with each shot’s curved edges suggesting that they’re hurried photographs of a TV screen rather than the digital grabs CF generally used. The 80% score is more than respectable but feels ungenerous, particularly given that the only real gripe appears to be the graphics. ZZAP! 64’s 90% feels way more appropriate: its review of “a first class conversion” notes that it bests the Amiga version, and Your Commodore was even more smitten with the carnage. They awarded Midnight Resistance 95% – “it’s a game and a half.”

For reasons that aren’t entirely verifiable or clear yet, there are two versions of MR in circulation – a long and short game. One has just three quarters of the levels of the other, though even the shorter version has the end sequence and appears “complete”. It’s possible the short one is from a version that came packaged with Commodore 64s or in a compilation; another theory is that one may be the budget re-release and another the full price version although this seems unlikely. Games tended to come around again on budget in their entirety. There are other theories, too, and it’s a mystery we’ll continue to look into. Meantime, consider it a heads up: go and find the complete thing on ROM today and enjoy the levels you never knew were there. This, dear friends, is one of the most accomplished arcade conversions the Commodore 64 ever saw.

NOT TO BE CONFUSED WITH…

Get a high score and on the entry screen, type SIAMESE. The borders will flash, and infinite lives are yours.

…AND IN PART TWO…

Next time, we go deeper into the Midnight Resistance story – speaking to the guys at Special FX about the creation of one of the bloodiest, slickest Commie games ever (Editor’s note: this feature’s on hold until the guys involved have some time to tell the story properly – but we’ll get back to it!). CF