Skip to content
In 1993, there was an official McDonald’s game for the Commodore 64

In 1993, there was an official McDonald’s game for the Commodore 64

In part two of our series about  strange C64 licenses, we take a look at how Virgin turned a burger joint into an 8-bit computer game – and discover both […]

In part two of our series about  strange C64 licenses, we take a look at how Virgin turned a burger joint into an 8-bit computer game – and discover both the story behind its biggest flaw and a surprising connection to Uncharted 4.

Patrick McDonald could have had no idea what he was starting when he opened a humble food and drinks stand in Monrovia, California in 1937. He called it the Airdrome on account of its proximity to the airport. In 1940 Patrick’s sons Richard and Maurice moved the business 64 kilometres east to San Bernadino and renamed it McDonald’s. The family found success by sticking to a limited menu offering the same options time and again; as the business grew, people flocked to McDonald’s wherever it opened because they knew what they were going to get. In just a shade under two decades, McDonald’s sold over a hundred million burgers.

Ray Kroc, who sold McDonald’s their milkshake machines, was fascinated by the business. In 1954, he convinced the sceptical brothers that he could make a success of franchising the restaurants (up to now, the company had operated in warm climates. Richard and Maurice weren’t sure the self service model would work if people had to get out of their cars in the rain). Kroc sent the business nuclear, and was able to purchase McDonald’s in 1960. By 1967, he was ready to take it overseas. First came Canada, then Costa Rica. It reached the United Kingdom in 1974. The Woolich, East London store was the company’s 3,000th restaurant.

One of the many reasons Ray made such a sensational success of McDonald’s is that he understood the business was selling a feeling as much as it was selling burgers. He wanted children to feel good about eating in his restaurants and to nag their parents to eat in a McDonald’s (which in turn were easily identifiable from a distance by his inspired logo; today, more children under the age of four recognise the golden arches than know their own surname). This thinking is where we get Ronald McDonald and his cartoon series from, and Happy Meals, and the Hamburglar, and loads of other stuff aimed at kids including…computer games.

M.C. Kids came out in North America for the Nintendo NES in 1992. The box tells you that it stars two kids called Mick and Mac. Their friend Ronald McDonald has been robbed of his magic bag by the Hamburglar. The kids (“lean, mean, and in their teens” it says in the enclosed instructions) agree to go and get it back.

So there’s your potted history. We know what you’re now asking: how do you make a game out of a burger chain?

By nicking the ingredients from Super Mario is how.

M.C. Kids is seven worlds and thirty levels heavily inspired by NES hit Mario 3, which in 1992 was already considered one of the greatest games of all time. When Ocean and Virgin got the rights to release it in Europe for machines including the C64 there was much excitement. Ever since The Great Gianna Sisters had been banned in the ’80s for being a direct rip-off of the iconic platformer, Commodore owners had quietly hungered (are there more of these food gags or is this the last one? – Ed) for something similar. And here it was, in the spring of 1993, renamed for the UK as McDonaldland.

You’ve probably got a good idea of the game already by the screenshots and the word ‘Mario’, right? But let’s take a closer look. Once you get in to the game proper, you’re presented with a Mario-esque game map. It’s just for show, though: to work as a C64 tape game, you have to play sequentially. So you hit fire to go and you’re dropped into a world of platforms, rotating McDonald’s logos to collect and all manner of baddies that you can kill by either throwing a block at or – and here’s the crowd pleaser everybody wanted – jumping on their heads Italian plumber style. There are hidden areas, too, accessed by jumping onto coiled springs or finding pits. On each level is a card that you need to collect before heading for an exit. Each world has six cards; collect them and you’re transported to the next.

It’s pretty easy to start with, and the difficulty curve is fair. The graphics are true to the NES original as well. There are plenty of solid colours and vague interpretations for the backgrounds (a sort of upside down V for a mountain, for example) and the music is all very jolly. The scale of the thing, too, is impressive: the original game is almost all here (we’ll come back to that!), scrolling in every direction. 30+ levels can’t be sniffed at. But there’s a major, major flaw with McDonaldland which was nailed perfectly at the time by Commodore Force reviewer Miles Guttery:

“The speed of the scrolling is the game’s major fall-down. It’s unforgivable that McDonaldland should be so sluggish. Granted the levels are big…but it’s positively expletive-inducing when you hit a spring and are propelled off screen and have to wait several seconds for the scrolling to catch up with your sprite – who’s probably dead by this time anyway. You have to ask, what went wrong?”

Well, 26 years later we can tell you.

C64 McDonaldland was published by Virgin, and developed out of house by Miracle Games. One of the team spoke to us anonymously, and confirmed that the game was running pretty well up to a certain point. Then came The Thing That Went Wrong.

IT’S ALL IN THE MUSIC

The game’s tune was written by Henry Jackman. You might well be familiar with that name, because he’s gone on to do things like the score for Uncharted 4 and music for films like X-Men and Captain America. He does things big, and he always has: back in the early ’90s,  the Eton schoolboy used off-the-shelf music program Electrosound to compose McDonaldland’s tune. Put simply, Electrosound is very greedy on the C64’s brain and it slowed the rest of the game down. It’s also why you view the game through a “letterbox”. If you’re interested in this in more detail,  we go full geek on this at the end of the article. Keep reading!

The team could and wanted to fix this issue, but like so many other C64 games in 1992/3 McDonaldland fell victim to time. Those publishers who’d taken a risk on the ageing beige box were desperate to get games into the shops before the high street abandoned the C64 forever – so the game shipped as it was. The rush to release it also means that a few of the later levels are sparser than in the NES original.

“Apparently, at the end of the project I set fire to the C64 out the back of the office”, says our man from the team. “It was a stressful project, late from the offset. I got £500 – an envelope full of fifty quid notes, and I couldn’t spend them anywhere as no shops would accept them!”

The team did get some small revenge, though:

“During final testing, the marketing guy from Virgin came and as you say, we were really tight on time. He came for the master disks and was so knackered we all wrote on his face and head in biro and he left for his train covered in pen and didn’t realise!” 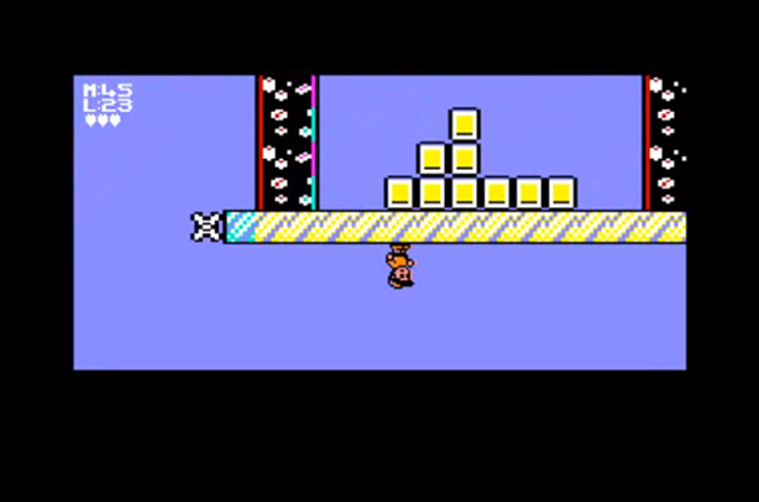 Looking at McDonaldland today, you have to echo Trenton Webb’s editorial from the month that this game featured on the Commodore Format cover. It’s amazing Virgin supported the Commodore late in 1993 (and this wasn’t their last game, either: Alien 3 arrived in the Autumn). CF gave it issue 31’s cover, and a middling score of 71%.

It can’t be said that the Commodore can’t “do” this game: look at the very recent Sam’s Journey, for example. It scrolls beautifully and its Mario  style map lets you pick the level of your choice. All McDonaldland needed was some more time. There is a very enjoyable platform romp lurking here: the music issue is solvable, and all the work parts are there in the code to recreate those last few levels the way they are intended to be. If somebody out there is looking to do a new remaster or deluxe edition of a C64 game in the same way we’ve seen Ghost ‘N’ Goblins or Speedball 2 in recent years, surely a prime candidate – a diamond lurking in it own rough – has to be McDonaldland. CF

WHY THE GAME’S SO SLOW EVEN THOUGH IT DOESN’T NEED TO BE: AN EXPLANATION

Our friend on the McDonaldland team told us the music player took up “one third of the game’s raster time”, and that’s why the game’s so slow. So what does that mean? We handed this one over to Commodore Format‘s Andy Roberts:

“So you could think of “raster time” as basically ‘processing time’.

The raster is an electron beam that starts at the top of the screen and draws dots on the screen, line by line, to make the final image. Once the raster reaches the bottom of the screen, it returns to the top to draw the next frame.

You ultimately want your game to run at 50 frames per second, so it’s nice and smooth (a la Mayhem In Monsterland). But, the C64 can only do so many things within 1 frame.

If you have a lot of big routines – like a scroller or a music player – these take a lot of time to execute and the code can spill over into the next frame (resulting in flickering or juddering).

So what he’s saying is that because the music player used so much of the processing time available, they a) had to reduce the size of the scrolling area, and b) probably had to spread the code across 2 frames so that the game isn’t as smooth and runs at half the speed it could be.”

…AND ONE MORE THING

In one of CF‘s stranger  moments, issue 31 included a McDonald’s special pull-out. It included a guide to making your own burgers, and an interview with the British branch of the business. They revealed McDonald’s UK was testing the McPizza in East Anglian outlets, an idea which was never rolled out because they couldn’t cook the dough fast enough. All of that’s here, including a link to the whole mag, in our ish 31 feature. 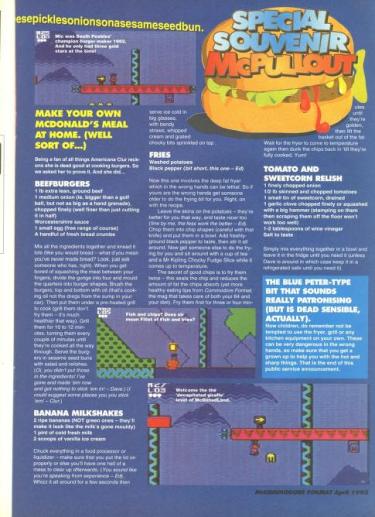