Read Commodore Format  25 (October 1992) here.  Hyper links take you to specific articles. This issue had a subscriber’s newsletter. Read it here. Time for one of our regular checks in […] 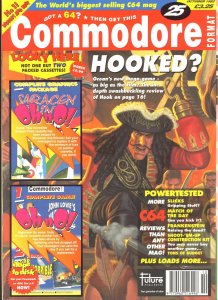 Time for one of our regular checks in this series to see  what else was going on in the world at the time of Commodore Format. Are you ready? Let’s contextualise! In October 1992, Sinead O’ Connor  ripped up a photo of the Pope on Saturday Night Live, causing the NBC television network switchboard to light up like never before and propelling the Irish singer to infamy. Reservoir Dogs was at the cinema, and within weeks Bill Clinton would become the 42nd President of the USA (the two events are unrelated – Ed). Back in Britain, the UK’s tabloid newspapers – a little late given the song had already been number one through September – were kicking off in time-honoured style at The Shamen’s ecstacy glorifying number one song Ebeneezer Goode.

Commodore Format, meanwhile, was celebrating its second birthday and was more popular than ever. 60,045 copies a month were sold in the first half of 1992, proving that the UK still gave a damn about the C64. It didn’t mean that time wasn’t marching on, though: whilst this month’s cover was dedicated to Disney’s blockbuster Hook, the C64 version was a scaled down conversion from the Super Nintendo. Its consoley, NES-ish graphics were decent but reviewer James Leach correctly observed that the C64 was capable of a better game if they’d write one specifically for it. Sadly, this was really the way things would be in the last commercial months of the machine: the big titles were conversions of software designed to run on much more powerful hardware. This, as we’ll see in future installments of our issue by issue guide, would reach a tragic climax with US Gold’s horrendous Commodore interpretation of Streetfighter 2.

A PRESENT FOR YOU ALL!

Hook wasn’t the thing most folk were interested in on this month’s cover, though. Affixed above the regular Power Pack was another tape, holding on it the full version of art utility Saracen Paint. It wasn’t exactly “free” – the cover price rose to £3.25 as a one-off – but this nifty bit of software had been reviewed just eight months ago, in issue 17, and had retailed at £12.99. It was quite the scoop, but like the inclusion of Famous Five on last month’s covertape it also told another story: clearly, Saracen Paint hadn’t sold very well at all and the publishers had sold it to CF to try and recoup any money they could from it. It would be the last major utility release for the C64. 60,000 readers CF might have, but the machine was inching towards the end. Advertisements for Future Publishing’s new SNES and Megadrive magazines merely confirmed what was blatantly on the horizon, with the Super Play ad  (below)  hinting at not just an improvement in tech but a change in gaming’s culture. No more would computers be the domain of boy’s bedrooms, but instead in living rooms, to be enjoyed by families, older folk and – gasp! – girls. That sounds lame because it is:  until now, computer stuff had almost exclusively been aimed at boys and young men.

NOW JUST HOLD ON A SECOND

Oh come on, you know it’s true. The 8-bit micros were the domain of younger boys, and the computer was, for the very last time, hidden away upstairs surrounded by posters, dirty laundry and cans of Coke. The rest of this month’s games are demonstrative of the audience: the cheap and cheerful Slicks was amazing two-player fun for a lad and his best mate after school, with CF saying it could have “justifiably been released at full price”. It’s true, too:the £3.99 racer was so good, the urban myth goes it’s where the Nintendo game Micro Machines comes from. (Read our feature on Slicks here) Then there was the dry but engaging enough football management sim Match of The Day, which like all soccer games from the era has aged really badly. The “highlights” section, featuring a badly drawn Jimmy Hill and Des Lynam, is laughable now but was considered polished in 1992. “It’s classy and flexible”, said CF.  “But at £9.99 you’d have to be seriously wealthy to splash out £9.99 on a management sim with knobs on.”

At the risk of ending on a downer, this really is the month that the commercial end of the machine begins to slide into view. It’s the little things: page 11 talks about a new telly show for computer games, Bad Influence!, but producers say it will not feature the Commodore 64. In fact, the C64 did appear once and so did the short-lived official CF website. It was a bit mean-spirited, though. See Violet Berlin making a bit of an arse of herself at 16 mins 38 secs in this clip (Editor’s note: this video is temporarily unavailable because of a copyright claim, but we’ll see what we can do in future – Ed)

Yep. Just to top things off, the bottom of page 11 revealed that a new C64 pack would be available in shops for the autumn featuring – far too late – a disk drive and the Ocean game Parasol Stars. The package never arrived for three reasons: one, Commodore had messed around with the C64’s price point so often in the early ’90s that major retailers like Dixons had given up on them. Two, at £149 you could get a new Megadrive or SNES. And three, er, Parasol Stars never came out because the programmer’s wife got drunk and destroyed the source code. No, really. Read about it in our round-up of issue 21 here.

SO THERE WE HAVE IT

It’s a case of using the benefit of hindsight to read between the lines this month, really. On the surface CF has really hit a rich run of form and the writing is excellent. But the signs are there that the machine isn’t long for the world. Soon, CF would be the only place most folk could get games (via the covertape). It’s one of the reasons why we aren’t even at the halfway point in our look at every issue of the magazine. The C64 might have started to wane, but people were still buying Commodore Format. See you next time for a look at issue 26 and that awful Streetfighter 2 convo! CF

Aside from Saracen Paint, this month’s main cassette featured a hugely enjoyable demo of Slicks to go alongside the review. The instructions take up a whole page, and you can’t help wondering if somebody was glad they could fill one with it, frankly. Then there was a whole level of Hagar The Horrible, which we mentioned in our look at issue 24. In the end it didn’t get a UK release, so this was the only time most Brits ever saw it. Finally, the decent-enough-but-dull John Lowe’s Ultimate Darts from Gremlin was the month’s full game and tech editor Jason Finch’s diskzine, Club Light, had a little demo issue to try too.