A look at issue 26 of Commodore Format magazine.

The biggest game of the nineties was on the front of Commodore Format this month. For the few that don’t know, Streetfighter 2 is a competitive fighting game which originally appeared in the arcades during 1991. Full of stunning animated backdrops, huge numbers of moves to master and an incredible two-player mode, it’s the Super Nintendo version – considered a system seller – which is most famous. But what has been forgotten is that it turned up on the old micro systems in Europe via US Gold.

The thing is, Streetfighter 2 was very much a game of its time, but the Commodore 64 was from ten years before that. The computer had more than adequately handled arcade conversions to this point – think Midnight Resistance and Rainbow Islands – but if you’re looking for the precise moment at which the C64 probably couldn’t keep up anymore, Streetfighter 2 is probably it. We’ll come back to this in detail in a few months’ time when the game gets reviewed. For now, you can read a strangely apologetic preview (“there’s still a lot of polishing to do!”, “don’t worry!”) here. If the tone strikes you as weird, it’s because the exclusive was granted only on the condition that the game was shown to staff by the game’s project leader in a controlled environment.

THE HERO OF THE HOUR

If you’ve ventured this deep into a website about Commodore Format, we’ll wager that you already know all about 100%-rated C64 supergame Mayhem In Monsterland. If you don’t, check out the minisite here. Issue 26 is special because it’s the first time we are introduced to the game, but not before Apex Computer Productions talk us through some of the ideas they’d shelved in favour of the yellow dinosaur: Katapult Kidz was going to be an arcade adventure featuring two schoolboys running about with catapults, and Squish featured the same characters but with mallets. H20 took the idea again and gave the kids water pistols! But it was Theo Saurus, about a baby dinosaur dishing out justice to the medieval villagers who’d killed his parents, that eventually spawned Mayhem. The game’s creation would be chronicled monthly from now on in CF.

NO GAMES NO PROBLEM

It’s fair to say that the number of games coming out on C64 in 1992 had now dwindled to the point where it was getting difficult to fill a 60+ page magazine with reviews. Instead, we got some of the most interesting features the magazine had run since its early days and it’s in issue 26 that they really kick in. So You Think You’re A Fan explored the pre-internet phenomenon of fan clubs. For example, you “simply clip the barcodes off the next five Codemasters games you buy” to join theirs and in return you got a letter about the latest games every few months and a Codies t-shirt. It sounds naff now, but it’s easy to forget how difficult it was to directly reach your customers before the internet. 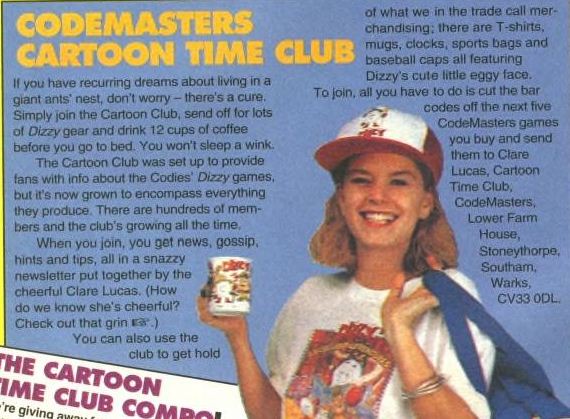 Meantime over the page, James Leach carried out Commodore Format‘s first and last joystick round-up. With christmas approaching the novelty peripherals were out in force, and it was possible to buy one in the shape of Bart Simpson, an Alien or the Terminator. They were all awful for precision gaming of course. Look nice on the shelf though!

The trio of features was completed with the first part of Face To Face. The reader Q+A series first spoke to Ian Stewart, managing director of Gremlin Graphics. It’s a bit of a missed opportunity, in honesty, featuring such classics as “what is Gremlin Graphics’ address”?, but as we’ll see in the coming months it did get better.

Alright, alright. There were a few this month, although most publishers were holding things back for the C64’s last commercial christmas. Stuntman Seymour was the sort of platformer 1992 was saturated with, but it played well. “A bit easy”, said James Leach. “And too similar to DJ Puff“, which had been reviewed back just four months earlier. The truth, as we now know, is that the Codies’ freelancers had all been using the same engine and swapping bits of code. CJ, Seymour, DJ Puff: all the same, but just a bit different. (Read the DJ Puff feature here – Ed)

The only other original games this month were the so-so PopEye 3 and Boxing Manager, but the trick here is how Trenton Webb’s Commodore Format didn’t let this dip stop the magazine. Increasingly, it was moving into the centre ground of the market: soon, for some, it would be the only C64 related item they could buy from a shop shelf. CF 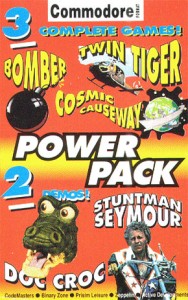 Three full games and two demos in a great package propping up the mag this month: headlining was a whole level of this month’s lead review, Stuntman Seymour, and it was joined by a demo of  platform collect ’em up Round The Bend (also known as Doc Croc). Prism Software’s 1987 3D game Cosmic Causeway was epilepsy inducing but fun until the headache arrived, at which point you could switch to some PD shooty fun courtesy of Twin Tigers or collect explosives in buckets in the exclusive Bomber. Nice tape.