This issue had no subscriber’s newsletter.  Read the accompanying Power Pack feature Commodore Format 29 arrived a week later than usual because…well, it was the ’90s and they still had […] 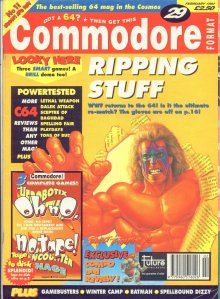 Commodore Format 29 arrived a week later than usual because…well, it was the ’90s and they still had proper Christmas breaks back then. Printers and distributors closed down, and software publishers were on holiday until January 2nd and didn’t send new games to review. When the February issue appeared on January 26th, you’d again have to question anybody that said the C64 would be commercially dead in less than a year: this month the computer saw Streetfighter 2, a new WWF beat ’em up, the official Lethal Weapon tie-in and a Doctor Who game. Again, not just games but games: big titles and household names.

So let’s cut to the elephant in the room. Streetfighter 2 – the iconic, era defining arcade beat ’em up – had arrived on our beloved 8-bit.  The bottom line is that the game is beyond the Commodore 64. Of course it is! This was a 1991 arcade game with custom chips and multiple buttons, after all. It was never going to work loaded into 64k from cassette and using one fire button. Then there’s the rush factor: US Gold knew the C64 world was dying and had to get it out before there was nobody left. It’s awful, but the reality is that no attempt would have been the Streetfighter 2 we knew (though we live in hope of a fanboy version proving us wrong one day! – Ed)

Not that you’d have known this from reading Commodore Format‘s 80% rated review. CF scores often erred on the high side, but you’d have to say that this is one of the most generous reviews in the magazine’s history. There’s no mention of the cut-down moves, the jerky sprites, the way fights seem to end almost at random or the way the game struggles to be coherent via tape multiload. And what’s with the use of sprites from the SNES game to decorate the page where C64 screenshots should be, eh?  There’s “supporting the C64” and there’s delusion: what CF saw that merited 80% here, we’ll never know. 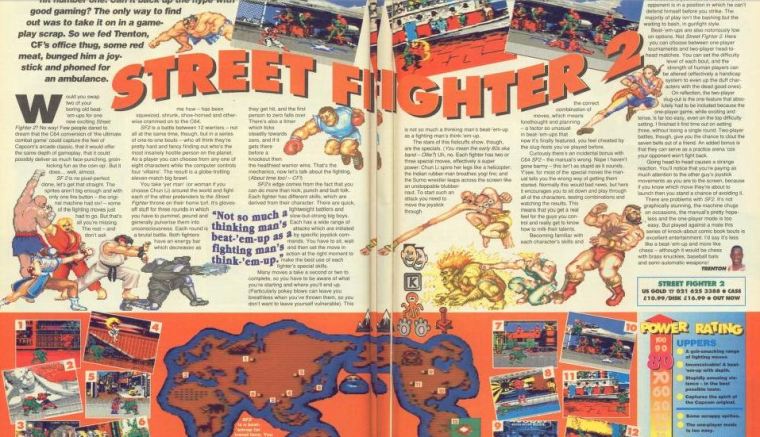 WHOOOOOOOO ARE YOU? WHO WHO? WHO WHO?

Dalek Attack wasn’t much good either, but at least CF said so. More interesting was the interview with current Doctor Who Sylvester McCoy on the opposite page: he objected to the weak intro screen of his face, but was more worried about the game’s violence. “My Doctor is from another world”, he told Dave Golder. “I wanted him to be much more intelligent and know that violence is not the answer. If my Doctor is doing anything violent, I’m really saddened by that”. CF gave the game 28%, adding that a “TV test card couldn’t be more tedious” . An aside: you wonder if Dave Golder, a known Doctor Who superfan and later editor of the legendary science fiction mag SFX – was harsher on it than need be because it wasn’t authentic to something he loved.

Yeah. It’s unusually negative so far, isn’t it? Well…Lethal Weapon wasn’t bad, and it was cool to see another film license on the C64 so late. It’s an Ocean tie-in, so you can probably already imagine the shooty/platformy action, but it works well and is typically polished. WWF2 was OK but didn’t bring anything new to the genre, which meant the surprise barg this month was Codemasters’ Superstar Seymour compilation: five games featuring the, er, walking potato (good one – Ed) for £12.99. “As usual with these boxed sets, you have to take the rough with the smooth”, says Clur. But the top arcade action of stuff like Super Seymour outweighed the couple of naff Dizzy clones: it’s a shame Seymour isn’t more loved.

Speaking of the Codies, the regular Q+A feature Face To Face featured David Darling, their founder and – back in 1993 – director. The biggest selling Codemasters game by that point, he said, was Treasure Island Dizzy, and he reveals something interesting about their character Seymour. Originally, Seymour Goes To Hollywood was going to be a Dizzy game, but they realised Dizzy had to stay in fantasy, not real, worlds. Voila, Seymour was born.

The story of the month is Streetfighter 2, really. If you are looking for the moment that the C64 cannot keep up, Streetfighter 2 is probably it. Any kid with the Commodore version was missing out, and there’s little doubt the game nudged  even more people in the direction of consoles like the SNES.  What the C64 could do, and do well, was platformers and puzzle games: fortunately, there were a raft of them in the coming months, including a game based around McDonalds (!) and the official Comic Relief game. Played to its strengths, the C64 was still ace: and that’s what we’ll see in the next few months. CF 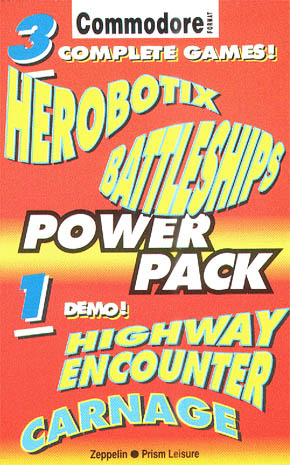 Three games and a demo in February ’93. The tape led with a trial version of top down racer Carnage. Herobotix was a maze explore and shoot ’em up that needed a very big sheet of paper in order to map, and Battle Ships was…y’know. Battleship. The tape was completed by Highway Encounter, an isometric 3D strategy game originally released in 1985. Here’s our long read on this month’s tape.