A look at the July 1993 issue of British Commodore 64 magazine, Commodore Format. 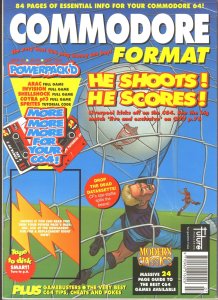 If June’s glossy relaunched CF hinted at Future Publishing’s commitment to the Commodore 64, July 1993’s issue cemented it. In the face of an evaporating software market, CF34 was the biggest issue of the magazine in years. The centrepiece of its 84 pages was a special Modern Classics pull-out, the “complete guide to all games currently available for your C64”. At 24 pages, the pull-out was the same size as the entire magazine would be just 18 months down the line!

It’s really CF at its best, with staff past and present flagging up their favourite platformers, RPGs and every other genre you can think of. It’s wonderful to see Steve Jarratt again, enthusing over Argonaut’s Starglider. Dave Golder remembers what’s so glorious about Exile (“everything on screen obeys the laws of physics”), and James Leach goes back to 1985 to find that Lords Of Midnight “looks horrible…time hasn’t been kind. But it’s brilliant to play.” This excellent feature is still great to read today if you want ideas for something new to play.

AND WAS THERE ANYTHING NEW TO PLAY THIS MONTH?

Yes, actually. This month’s covergame was the relatively unknown Liverpool FC. Not to be confused with Ocean Software’s aborted 1990 game (read about that here), it’s a classy top-down sim’ with some neat digitised graphics. It was a treat to see such a big license in mid ’93, and Dave Golder enthused of its speed and fluidty: “it plays well and there are enough options to keep adjusting your formation for an entire season. It’s one of the best kickers on the C64.”

Text adventure The Argon Factor was the month’s other original release. Set in 2152, the sci-fi adventure had an interesting twist. If you were the first to complete it, you won £1,000. No doubt that’s why it had a hefty £10 price tag, but kudos to Logyk Software for doing something a bit different. We wonder if anybody claimed the prize…

As Simon Forrester told us, one of CF‘s aims was always to be your friend: the cooler, older mate who dropped ’round once a month to play on your C64 and tell you about everything that’s happening. One of the ways this was achieved so effectively was by emotionally tying readers to the magazine’s staff: in the earlier days, the Steve Jarratt and Andy Dyer “Grumpy and Thicky” double act radiated through the pages. If you “hated” Steve, you rooted for Andy (and vice versa). Third editor Trenton Webb built up the cast of characters too, never more effectively than with “star staffie” Clur, who wrote this month’s memorable behind-the-scenes look at a month working on Commodore Format:

There are some truly lovely insights into the sort of stuff that made CF the most popular in the market. For example, Clur went by train all the way to Croydon (from Bath!) to personally pick up a copy of Liverpool FC ensuring an exclusive; rival Commodore Force later suggested CF must have reviewed an unfinished version. Not so: they just wanted it more.

You just can’t be anything other than impressed by this month’s Commodore Format. The C64 was in massive decline by now, but you can’t tell it by reading issue 34. To briefly go back to the Drop The Dead Datasette feature, Clur’s repeated reference to calling, calling, calling software houses for news and games clearly paid off. You can read about new games, old games and games many months away from release. And it’s all done so positively that you can’t help but feel good about owning a Commodore 64. Truly, this month CF was your mate. CF 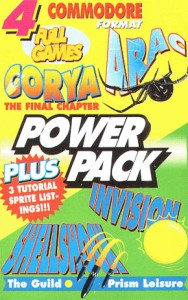 Four games and a sprite tutorial (sounds like a good film – Ed) this month! Shellshock is a Commando clone originally intended for budget commercial release by Beyond Belief but sold to CF as the business collapsed; there are four levels and a back-story but you know the score: shoot everything! Then there’s Arac, an arcade adventure a bit like Dizzy dating back to 1986. Invision is a weird pinball sim’ in which you can’t quite see all the obstacles, and Corya‘s third instalment completes CF‘s serialised text adventure. Oh, and the sprite tutorial stuff? It ties in with the Do The Sprite Thing feature by Bones (who, at the risk of ending on a downer, has since passed away).