A look at the October 1993 issue of UK C64 magazine, Commodore Format. The first look at Mayhem In Monsterland! 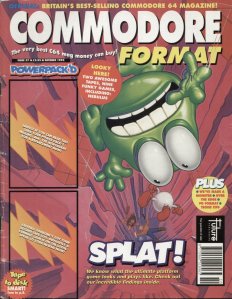 Commodore Format was now three years old, operating in a very different market to the one in which it appeared. To remove sentiment or hyperbole here, there’s only really one reason Future launched the magazine: in doing so, the company had a title for every single computer or console system and became a “one stop shop” for advertisers. To reach every single type of computer games user, all you had to do was call Future Publishing. The C64 user wasn’t one that many wanted to reach by ’93, though, and so from now on the mag’s major income was going to be the profit margin on the cover price. More than ever CF had to be relevant, and this month really marks its move into a more central position in the market. Or, more simply: it was more likely than ever that the only new Commodore 64 stuff most readers consumed every month was CF itself. It was a Big Deal.

October 1993’s issue came with two cover tapes (more of which later), leading with Hewson’s platform classic Nebulus. It tied in to a brilliant Nebulus cover and platform games feature inside, making the mag a complete product: you read about the best platform games ever, then got to play one for free. Great stuff, though you wonder if this one-off double tape was to soften complaints about this month’s 45p price rise (CF now cost £2.95, a whole £1 dearer than it had been at launch).

There were still a few new games around,  with the major event of October ’93 being one of them  (though not the harshly under-rated Alien 3, the C64’s last ever movie tie-in): Commodore Format had an exclusive preview of the platformer it had talked up for months. Mayhem In Monsterland was here, and it was accompanied by a demo on the cover tape. Clur urges you to load it up and walk through it with her, and it becomes apparent that the non-standard, vibrant colours and cute animation we’d been promised for months were not wishful thinking: Mayhem was without doubt the best looking Commie game ever. You probably know how this story ends, but we’ll return to Mayhem in our look at issue 38.

CF37 features one of the most remembered articles in the magazine’s run. Over The Edge takes a look at what might happen in the 25 years proceeding 1993. Decades on, it’s fun to see what came true. Hutch’s piece is actually notable for how it downplays stuff: online gaming is predicted, for example, but talks about playing Elite against somebody “hundreds of miles away” or perhaps just down the street. “Imagine flying along”, he writes, “and every ship you see is a real person”. Virtual reality gets a mention, too, and is spookily accurate. “The only thing holding it back is the graphical speed and the processor running it”. Almost a quarter century later, we’re just about there. Over The Edge correctly calls GPS in cars and “game TV”; usually, articles trying to predict the future are deliberately silly just to get the reader excited. This one is more measured and thus, perhaps, more entertaining looking back now than it was in 1993. We’ve had a closer look here.

Tucked away at the end of this month’s Mighty Brain are two paragraphs hinting at the direction CF was about to go. Commodore Format hadn’t, to now, really been one for editorialising or setting an agenda but that was about to change. In Soap Box, Hutch – writing as TMB – acknowledges in CF for the first time that almost everyone has abandoned the C64 for consoles. “At 200,000 sales for £50 a pop, you can’t fight the logic of it can you?” When the article signs off by saying the future of the C64 was down to its users, and it would stay alive as long as they produced games, nobody could have imagined it would still be happening a quarter of a century later. If that had been written in Over The Edge, even the most hardened of C64 fans would’ve laughed. But it’s true,  and as far as the UK is concerned this month is where that movement started. Awesome work, Commodore Format.  CF

Unless you only come to this part of the website to read the Power Pack bits (fair game), you’ll know by now that this month Commodore Format had not one but two tapes stuck to the front cover. They featured twelve separate items, including nine games. Top of the pile was the first look at Mayhem In Monsterland: it was only a third of one of five levels but it already felt massive, and the non standard colours and speed had kids frothing with excitement for the whole thing. Full game Nebulus hardly looked crap, either: Hewson’s unique 3D platformer was a bit of a scoop, and younger gamers were amazed by the way its landscape moved (check out the video up there if you don’t know the game – Ed). Prism’s  1987 I-Alien was a scrolly shooter with a twist, and the rest of the tape was made up with a ton of impressive PD. It was enough to keep you going for months, and made for one of the best value Commodore Formats ever.

As we said earlier on, this month Commodore Format went up 45p to £2.95 – a whole quid dearer than it had been at launch. There’s little doubt Future took the hit on an extra cover tape this month to try and soften the blow for readers; in reality, the price hike was nothing to do with providing better games. With readers dropping off and advertisers disappearing, the money was needed to make CF viable. An extra 45p well spent, we’d say.