A look at the July 1994 issue of British C64 magazine, Commodore Format. 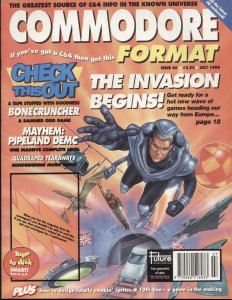 Issue 46 saw Commodore Format drop from 50 pages to 34, but this latest nip actually seemed to benefit the magazine. No longer was there a need to pad with retrospectives or book reviews; this new, punchy CF could comfortably cover the new C64 world without having to dig over old ground. The result is a sparky, fresh installment of what was now the UK’s only Commodore mag.

A cracking front page illustration (“this should win cover of the month”, notes an easter egg in the barcode) depicts helicopters, dinosaurs and a Turrican-type character emerging from the Channel Tunnel, which had opened mere weeks earlier. “The invasion begins!”, screams the headline, pointing to a centre-page feature on the new wave of software headed to the UK from Europe. Most notable is the news from Denmark, where we meet Profile Entertainment. They’re working hard on a “Turrican-type game” (hence the cover!) with an experienced group of folk including Rasmus Werrnerson of Hagar The Horrible fame and legendary musician Jereon Tel. We can reveal that the game had been nicknamed Liberation, and it was looking very lovely indeed. CF didn’t have any screenshots at the time but we can show you some now:

Sadly, Liberation was another casualty of the C64 market trickling dry; that said, Games That Weren’t have a slideshow, sprite demo and two playable levels here, so you can at least have a look at the code. What are you waiting for?

Back in Blighty, three games did see release this month. First was Square Scape, a pretty straightforward puzzle game by Paul Kubiszyn that you can read about here. Simon Forrester said it was “alright, but not very inspiring”, awarding it 35%. We caught up with Paul especially for this article: he’s still a massive C64 fan, and grateful for the lessons learned from the harsh review. “Square Scape was my first venture into assembly language programming”, he tells us. “Seeing software companies abandoning the C64 in favour of the Amiga, I wanted to do my bit to help. Unfortunately Square Scape turned out to be less inspiring than a sack full of Atari E.T. cartridges! 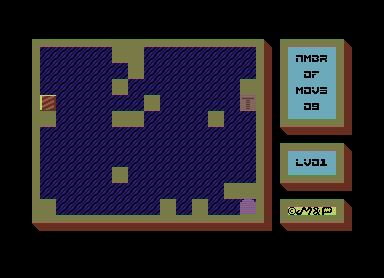 At the time, I couldn’t draw graphics, write music, or for that matter move a sprite past 256 pixels. I still remember the sound your square would make when it collided with a wall. It was a sound which I had recorded myself, by hitting a microphone against the floor into a sound sampler unit by Datel Electronics. I am first to admit the game was pretty terrible, not to mention impossibly difficult. Did it deserve 35%? To be honest I think that was probably a little generous; a year earlier and that percent would surely have been lower. Surprisingly, I still received several orders for the game along with a handful of nice letters from happy customers. Square Scape helped to shape me into the developer I am today, and for this I owe both the game and the review my gratitude.” Paul is now working on something very cool for iOS – have a look at the bottom of this piece for the details, and find out where to follow the project on social media.

Jon Wells’ Escape From Arth was a nifty space adventure in which you’re equipped with a jet pack allowing you to scale the many screens: it was skilfully programmed and looked great, but “the thrills are transitory”, reckoned CF. “the gameplay’s about as deep as a paddling pool”. This is a problem that would plague the homebrew stuff Commodore Format kept trying to peddle as the C64’s future; there were gems, but the narrative was often undermined.

More interesting was witch-themed platformer Wilberforce, which Dave Golder actually praises for having that hallowed “depth” even if it doesn’t totally realise its potential. It was sort of like Cauldron, and was coded entirely by Nabil Gonem. “[The Commodore Format score was] a disappointing 55%”, he says. “But it was also reviewed in a German C64 magazine (I forget the name) which awarded it 70%. The funny thing is that Mayhem in Monsterland was reviewed in the same issue and scored less than this!”. And what does Nabil make of the game now? “Unfortunately, the low mark in Commodore Format meant that not many copies were sold. I am amazed that someone still actually has one. I wasn’t really trying to make much money out of it, it was all just a bit of fun. And I didn’t make any other C64 games.” Wilberforce is out there in full if you want to play it – Games That Weren’t are to the rescue again here.

The rest of July 1994’s Commodore Format is about living in the now: the back page is devoted to Jon Wells’ diary of the new beat ’em up Tenth Dan, Gamebusters ploughs on through the Autumn’s big game Mayhem and there is news that, soon, you’ll be able to subscribe to Commodore Format again. There isn’t a retrospective or misty-eyed feature to be seen, and the execution of the mag – again, particularly in the way each feature is designed – can’t be faulted. Over the years Dave Golder’s short run as editor seems to have been somewhat forgotten, sandwiched as it was between Trent’s golden run and the agonising final year. It’s worth revisiting them all now to appreciate what he was doing fully: we were now mere months away from the official launch of the Playstation, ffs – but this month’s CF is feel-good and flawless with not a care to be seen.  It’s all about the love for C64, and that makes it one of the best. CF 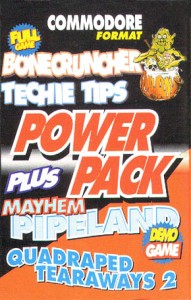 On the surface, this month’s tape led with Superior Software’s 1987 puzzler Bonecruncher. It was similar to Repton 3, which wouldn’t be so much of a problem if that very game hadn’t appeared on last month’s tape. Really, though, July 1994 was all about a surprise extra demo of Mayhem In Monsterland. This time, CF readers got to see all of Pipeland for free. Alongside the usual wad of Techie Tips, the tape was completed with Waz Pilkington’s music demo, Quadraped Tearaways – which CF insisted was a spelling mistake on behalf of the author and not an ill-advised joke.

PAUL KUBISZYN’S iOS STUFF: ALL YOU NEED TO KNOW

Cheers to Paul for chatting to us about Square Scape up there. He now works as an independent games developer under the name of pikXells. His first project XScape is an iOS and tvOS remake of Square Scape 2, the much improved sequel to Square Scape. Staying true to his C64 roots, the game includes all of the levels found in the original 8 bit version and more. Due for release later this year, XScape will celebrate 25 years of Square Scape. You can follow his progress on Facebook and Twitter below: