A look at the March 1994 issue of British C64 magazine, Commodore Format.

In March 1995, fugitive rogue trader Nick Leeson turned up at Frankfurt airport weeks after causing the collapse of Barings, the City’s oldest merchant bank. He then began a nine month battle to avoid extradition to the scene of the crime in Singapore, which failed. Back in the UK, early Britpoppers Boo Radleys released their three-minute anthem Wake Up Boo!, championed by new Radio 1 breakfast show DJ Chris Evans.  Manchester United and Newcastle met  in the early days of the month, and a goal by Eric Cantona gave United a 1–0 away win. It cut the gap between the two teams at the top of the table to a single point: the Lancashire side would go on to win their third Premier League title in as many years of the competition.

CF COST-CUTTING OF A DIFFERENT KIND

Commodore Format had begun to square up to the reality of the C64’s new place in the world in recent months, and March’s cover feature was a pretty blatant example. Bargain Hunter! shrugged its shoulders at the volume of old Commodore gear coming onto the second hand market and said it wasn’t a cause for sadness but a reason to snap up some cool stuff for hardly any cash. It was written by one-time Commodore Force techie columnist Andrew Fisher, who’s still writing about C64 today for Retro Gamer. He remembers the task of getting photographs for the feature back then: 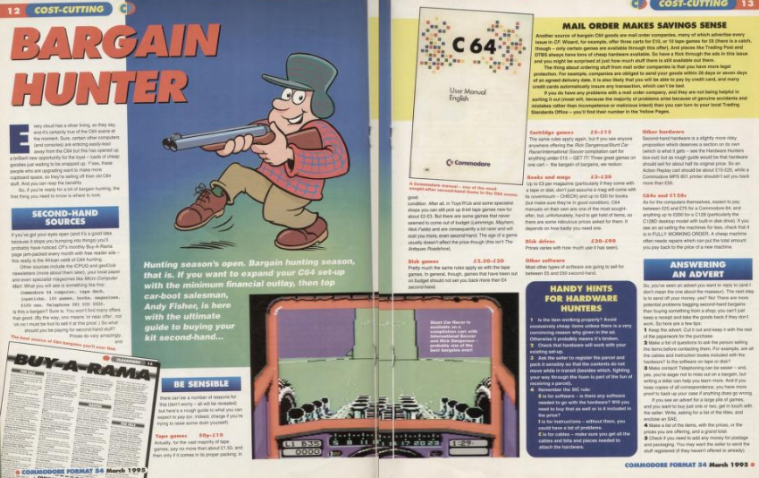 “The boxout title ‘How to recognise disk drives from a long way off’ was of course a Monty Python reference. The ‘photo shoot’ involved one white bed sheet, a Kodak disposable camera and the dining room chair I stood on. The photos were developed by Boots the Chemist in Cambridge, where I had bought many C64 games over the years. The text was written using a C64 word processor (Word Writer v5) and printed out. In that article I came up with SIC, a mnemonic for buying hardware. The idea being you would be sick if you didn’t check the hardware had the following:

S is for software – does it come with software, and what software is it compatible with?

I is for instructions – does it come with a manual?

C is for cables – does it include the necessary cables?

The irony was that the following page in that issue was Buyarama, filled with classified ads from readers buying and selling.”

There were five new games reviewed from across Europe this month (although the cover would have you believe it only to be four). By far the best was Bad Bytes’ puzzler Mystery; in classic style, it took five minutes to pick up but forever to put down. The Zinj Complex was a flick screen arcade affair with music remains utterly wonderful, too:

Contrast it with the bizarre, poorly programmed Sonic rip-off Saliva Kid, a game so bad it’s still uploaded to YouTube today as a joke. Even back in 1995 it was considered abysmal, and as reviewer Andy Roberts notes it was also from the same programming community turning its jealous nose up at the achievements of Mayhem In Monsterland.

One final note on the games this month: 85%-er Chicken was actually an old game by Summer Camp/Winter Camp author John Ferrari which had to this point never seen the light of day. What the story is there we’ll never know, as John sadly passed away in 1996 – but it’s worth checking out if you’re a fan of his work. It is, we believe, the last of his games to be released.

This month’s CF didn’t have an official “on sale” date announced in the previous month’s mag, and there wasn’t one for the forthcoming issue 55 either – leading some in early internet chat forums  to suspect that Future Publishing were running this enormously scaled down Commodore Format on an issue to issue basis. In mitigation, page 16 features only the third reader survey in the magazine’s history, which does suggest there was some planning for the future. A box asks for reader’s stories, too, wondering if anyone uses their C64 to play the recently launched National Lottery or if anybody had met the love of their life on a Commodore BBS. There are no official circulation figures for CF by this point, but it’s believed to have been around 5,000 to 10,000 (from a high of 62,000 in 1992). They were a mixture of the hardcore and the hard up; as we’ll see next time, the concern was that these remaining fans were spending money every four weeks on CF, but absolutely nothing else on their C64.  CF 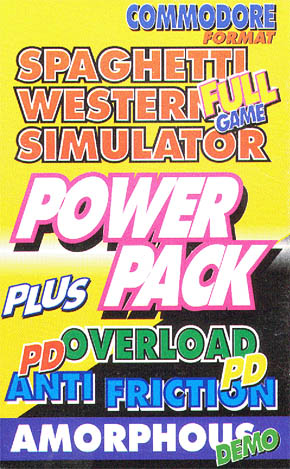 Spaghetti Western Simulator was the first game Roger Frames ever reviewed in CF1 (it got 52%). The Zeppelin title also curiously featured in the reader top 50 back in issue five-oh, and still has a following today. Its pedestrian shooting and blocky visuals will have you wondering why, but there’s no questioning that the game went down well. From the PD libraries was Antifriction, a “tribute” to the classic shooter Delta, and puzzler Overload. The tape was completed with a three-level demo of upcoming blob-thinker, Amorphous. Not bad value at all.