A look at the May 1995 issue of British C64 magazine, Commodore Format.

Commodore Format launched its WWW site this month as Future Publishing’s media empire – which had been launched exactly ten years prior with just Amstrad Action – looked to the, er, future. A home on what was still being called the “information superhighway” was simultaneously exciting and awkward: after all, its mere existence was a reminder that technology was moving on from our beloved 8-bits. Sure, a sort-of version could be retrieved on a C64, and Commodore Format makes a half-hearted attempt at explaining how on the news pages, but the truth is that the website could never be viewed as intended on the very computer CF served.

The mag’s story announcing the site – which was part of the wider FutureNet, covering everything from games to mountain bikes and knitting – is also a cute reminder of the internet’s infancy. There were “three million people waiting” for us, apparently – if you could find an online computer at all. CF suggested via college or school. If you could make your way to something squeaky and dial-up, here’s what greeted you. “Europe’s most popular e-zine”, apparently:

Very few CF fans appear to have accessed the site back in ’95, let alone have saved it. Frustratingly, it was before the days of Wayback Machine grabbing everything and a username and password was required anyway, so all we have are the screens in this month’s CF  and – incredibly – a brief glimpse on ITV’s computer games show Bad Influence. You can catch it (for mere moments) from 16’38 here (Editor’s note – yep, looks like this clip has vanished for now but we’re trying to find a new one!)

From the looks of it, all the CF “official site” ever had was a limited look at the current issue’s contents and the text from a few articles, so nobody’s really missed much. That said, we’re absolutely convinced somebody, somewhere out there must have it saved to a disk which is hidden away in their loft. If you think you might have, please have a look because we’d love to restore it. We’re currently talking with Future Publishing web folk of the time, too, who’re scouring their archives. We’ll keep you posted…

The paper version of CF is really good this time around and a true “complete package”. The cover feature – Animate! – ties to an exceptionally thorough three-page piece on making your sprites move smoothly. The green blob on the cover is actually the character you’ll find on the accompanying bespoke cover tape software, so there’s no reason not to dive straight in and get your hands dirty. This is really good, old fashioned Future Publishing stuff here. They show you how and give you the means to give it a try yourself, and it’s a great example of Commodore Format going the extra mile until the very end. no matter how limited the space. 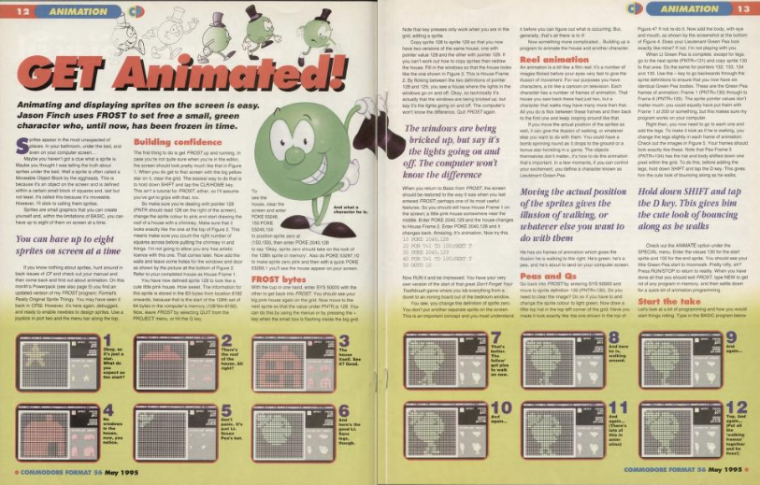 Contact Points was new, with Andrew Fisher guiding us around the world of Commodore 64 clubs and fanzines. The Commodore 64 Hire Club has always been a joke in C64 circles, not because it didn’t provide a great service but because it was a well known way to temporarily get a copy of a game you wanted and then pirate it. CF does well to sidestep the issue here, and also has a mention for Binary Zone’s new mag Commodore Zone. It would go on for 16 issues, and you can still buy a CD-ROM of them (and download the cover disks) here. Retrospectively, Clubs and Fanzines did many C64 fans a great service. When Format vanished, many a kid went back to C&F to connect with what remained of the Commodore world.

There’d been no mention of the “flood of games” from Europe for a few months, with none of those companies importing the titles seeing any sufficient demand. This serious issue – where people who demanded new software would not support those who then provided it – would come to a head later in the summer, which we’ll come to soon in this series. For now, though, some games were still dribbling out: Visualize were offering three for £2 this month, headed with Defender and Dropzone mashup Deadline. It was fairly typical of indie releases of the time: technically impressive, as would be expected of the enthusiasts coding them – but lacking in any substantial gameplay. For the price, though, all good.

Of all of the very late, wafer-thin issues this is probably one of the best. It’s classic Future Publishing Format stuff with a huge variety of content: games reviews, hardware, techie tips and walkthroughs. It’s a shame that late era Commodore Format is only remembered for the lack of pages. Almost right until the end, they brought something new to the table every month. It’s worth revisiting CF56 with fresh, somewhat older eyes. You’ll like what you find. CF

FROST was an updated sprite editor that had originally appeared back in issue 32 (May 1993). The new version tied in to the Animate! cover feature. There was part two of text adventure Darkest Road, too – allowing you to complete what you’d started back in issue 53. Flight sim’ Harrier was a challenge to explain in a fifth of a page, and the tape was completed with two SEUCK games from veteran of the utility, Alf Ygnve.