A look at the August 1995 issue of British C64 magazine, Commodore Format.

News came in this month’s CF that Future Publishing’s original magazine, Amstrad Action,  had closed after 117 issues. First produced in a Somerset barn in 1985 by former ZZAP! editor Chris Anderson (now of TED talks), it pioneered the games cassette as a covermount and had been the starting point for countless games journos.

Since Dave Golder at issue 44, Commodore Format and Amstrad Action had shared an editor and design team to make each operation viable. Cuts to the page count, paper quality and covertape content had followed on both titles, with the two 8-bit mags effectively operating as one. For AA to fold and not CF, then, was a surprise. There’s a lot going on here, so let’s take it one piece at a time. A few months earlier, editor Karen Levell had sent freelancers of both magazines this letter (with according changes in the AA version, of course): 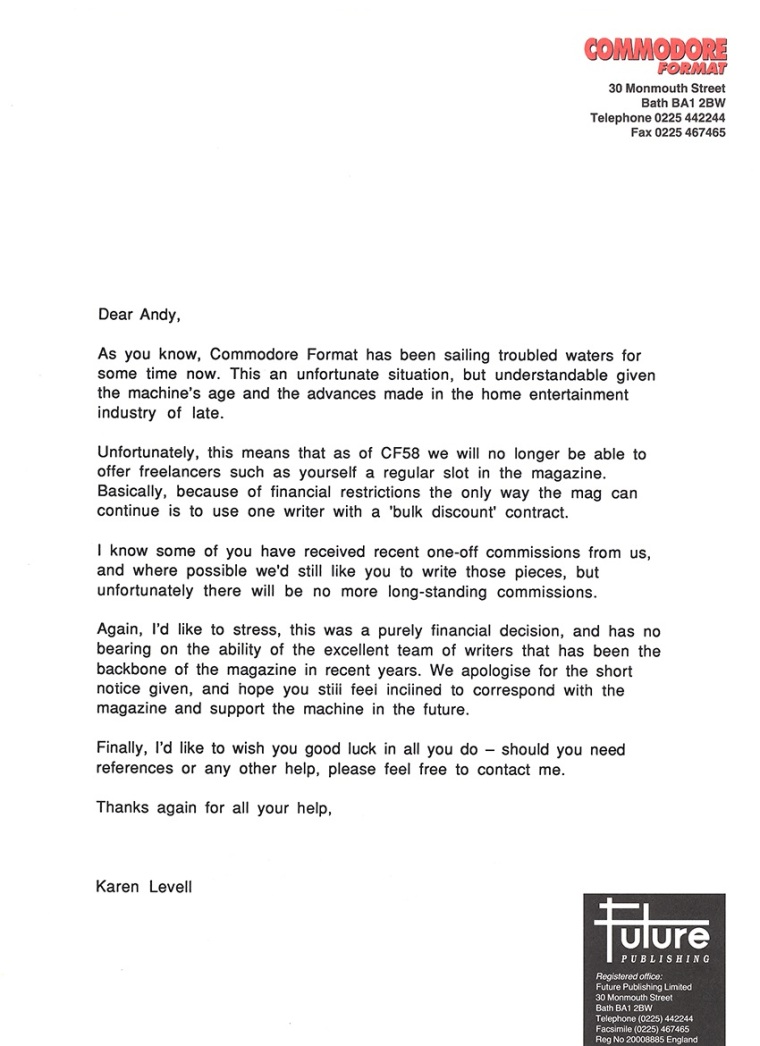 Issue 58 actually turned out to be issue 59, which is where we are now. In the meantime, Future had moved Karen Levell on to Cult TV magazine and installed former CF staffie Simon Forrester into that “bulk discount” freelancer chair. That’s right: CF was now being written and edited by just one man when he wasn’t doing his day job over on ST Format. But why only CF, and not AA? Online chatter suggests it’s because the next issue of AA was predicted to make a loss, and that is probably what the freelancers of that mag were told at the time. But Simon Forrester remembers differently:

“Well, they asked me to do both and I said no!”, he laughs. “So I just got CF as it was doing better, and that was that for AA.”  Without knowing it, Simon – who’d grown up with a CPC and started his career on Amstrad Action – had driven the final nail into its coffin. But never mind about AA. CF59 was here, now downgraded to standard A4 from super A4 width and on the cheapest paper Future worked with.   What did it feel like to be thrust into the CF editor chair, albeit on a strange “freelance” basis?

“Oh, the joy of a self-covered magazine printed on bog-roll with potato shapes. Will the last person to leave please turn out the lights? It was a bit scary, yeah, because nothing was really going on with the C64 at that point. Also, I wasn’t an experienced editor – I was just the last person there available who knew enough about the machine to be able to do it”. (Read our full interview with Simon here)

NOT ALL WAS LOST

There was some stuff going on this month, with a few previously commissioned pieces from writers who weren’t Simon making the cut. Andrew Fisher reviews Lemmings/Trolls mash up Walkerz on page 18, and there’s a look at Renne Softworks Riddles and Stones. As the latter piece says, you needed to do some big posting all the way to Germany to get hold of that 80% puzzler, but it shows you that CF didn’t stop looking for new things right until the end.

Back in the UK, brothers Paul and Mark Kubiszyn had started work on Super Pac Twins and were diarising (it’s probably a word – Ed) for CF. And with Contact Points taking a look at two paper mags and one diskzine, it’s clear that in summer ’95 the C64 still had more of a pulse than some of us might remember.  But Future weren’t making these cuts for fun, and with the rest of this month’s magazine looking somewhat flimsy (take this amusingly written but factually devoid piece on how the C64 is used around the world, for example) even the most ardent fans must have begun to question CF‘s value. £3.25 was a big ask for what you got in return, however well intended.

Let’s not end on a downer, though: Simon Forrester’s return brought some spirit and character back to a magazine which had traditionally oozed but lost it during the last year. The Hairy One knew the C64, he knew games and he knew Commodore Format. Just metres from where CF was being produced, Commodore Format’s original editor Steve Jarratt was now working on issue 1 of Future Publishing’s new Playstation magazine. In that context, Simon’s efforts should be applauded, not derided: a very real attempt was being made to keep CF alive for as long as possible for its small but solid audience. Quite for how much longer, nobody knew. CF

As if further proof were needed of the budget being pulled in, there’s just one item on August 1995’s tape. It isn’t great, either: Samurai Trilogy was an eight-year-old beat ’em up from Gremlin that scored just 29% in ZZAP! 64 back on its original release. Some readers reported issues with the way in which each section of the game loaded, too. A tape for completists only! 🙂