A look at the September 1995 issue of British C64 magazine, Commodore Format. 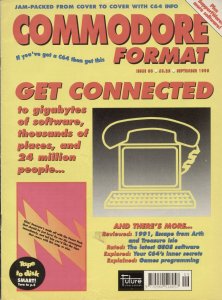 After yet more turbulence and another editor (see last month), the penultimate issue of Commodore Format is actually a pretty decent offering. Future’s decision to give the job of writing almost every single word of the mag to Simon Forrester (“I was the only one left who knew enough” – again, see last month) paid dividends, with a cover feature about getting online with the C64 proving both clear, interesting and concise – there’s even a pointer on what specific gear you need. It’s interesting to contrast this piece with issue one’s article from five years earlier; then, online was all about bulletin boards and general dorkery. In 1995, the word “internet” was fast becoming mainstream because of the WWW and CF‘s piece tries to show you how to make the most out of it on a Commodore (Simon’s editorial cheekily offers money to anybody who can write a web browsing app for the covertape).

THE SINCEREST FORM OF FLATTERY

Four new games arrived in time for a September 1995 preview. From Australia came Bad Bytes’ Misfortune, which is a cute and engaging enough platformer. It also lifts heavily from Mayhem In Monsterland and other platformers without being as playable or technically accomplished. But it’s possible to be too harsh on the thing if you don’t know the back story. Here’s the coder, Matthew Cox:

“I wrote this when I was in high school (about 1994) and it was never meant to be a major release. It just started as a project and grew over a few years! Eventually a few others got involved, we put it all together and released it. It was inspired by the Rowlands brothers writing articles in the C64 mags.”

Twin Terrors was a flick screen space adventure which CF compared to Bubble Bobble; then there were two other offerings imported from Europe. Nibbly ’92 is mistakenly referred to as Super Nibbly (“we couldn’t afford the rights to import the latter game!”, BIB Developments’ Paul Kubiszyn told us. “But Nibbly played as well”). And then there was Galaxian-a-like Starforce, rounding off another surprising late upswing in stuff available to play as we edged towards 1996.

One of the big supporters of the C64 in recent years had been Jon Wells. You probably know him best from his conversion of the 1987 Speccy adventure Sceptre of Baghdad (featured on issue 27’s tape – Ed), but in the 18 months prior he’d also self published text adventure Treasure Isle and the utterly lovely flick-screen sci fi adventure Escape From Arth. Both had been received relatively well, but Jon had a problem: the sales had been disappointing.

There are two ways of looking at this. Commodore Format had on more than one occasion bemoaned the readers who screamed for new software but didn’t buy the stuff that was released anyway. In defence, many readers were very young and very broke. But there was another factor which had beset the C64 from the start and is also credited with killing Amiga software stone dead years before its time: the home piracy network. Jon Wells had learned that some of his stuff was being illegally distributed around the world and he wasn’t receiving a penny for his efforts.

In response, Jon introduced a scheme called Supportware.  You sent him a blank tape or disk for, say, Treasure Isle and Escape From Arth and he’d send you the game back for free. If you liked it, you sent a small donation of your choice as a way of saying “I enjoyed that – is there any more?”. It was a last resort to “flush out the market”, Jon said. Sadly, the scheme wasn’t a success and Jon ceased C64 production: we’ll have more on that in the final installment of this series.

This was – even if we didn’t know it yet – long term techie writer Jason Finch’s (read interview) last appearance in Commodore Format. He’d been with the magazine since issue 21, making him CF‘s longest serving mainstay after Andy Roberts.  Jason answered hundreds of reader’s letters, and even if he wishes his parents had given him a piano instead of a C64 many Commodore Format fans will be grateful for the help he dished out from his university dorm room in Leeds (er, via the pages of CF – Ed). His last piece of advice is to Michael Peters of Chester, who wants to know how to, um, knock his disk drive. Dangerous stuff here.

The rest of the mag was made up with bits and bobs from Simon Forrester who – you’ll remember – was now the mag’s sole writer and editor. The Mighty Brain’s Potted Guide To Writing Games and the Back To Basics section did smack again of taking as long to write as they did to read, and the whole magazine is devoid of the things that used to truly make the mag great: big screenshots, explanatory diagrams and charts, etc etc. Stuff that required more staff, bluntly. Related: Future had made a decision halfway through the production of issue 60. No more time than necessary was to be spent on Commodore Format anymore. Simon hints at what was to come in his editorial. Next month, he says, will be “an issue to remember”. CF 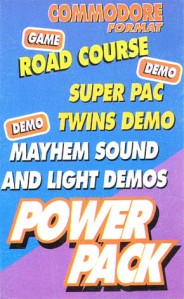 Super Pac Twins was a demo of the game featured on page 21, though creators Paul and Mark were annoyed by its inclusion. “We sent CF a demo for screenshot purposes, and clearly wrote NOT FOR POWER PACK” on the package”. It was a far from finished piece of work and the brothers were rightly angered by its presence. It wasn’t to be the worst crime of CF‘s late covertapes, though: that comes next month.

Road Course was a racing sort of thing made in SEUCK, Mayhem Graphics was a PD demo with some nice visuals you made your way through via the space bar and Zax Box 25 was a collection of SID tunes. If you’ve got the tape, the instruction page is here.