Nobody can say for sure why Commodore persisted with C2N datasettes and the tape format in Britain when the rest of the world had long converted to disk. A likely theory is that they wanted the C64 to remain at a competing price with the Spectrum and Amstrad CPC range, which wasn’t so much of a factor in places like Australia. Whatever the reason, there was clearly a concerted effort in late 1990 and early ’91 to kill off cassettes for good. The launch of the ridiculous C64 GS console (read about it here in our issue 1 review, and then again with developer Mevlut Dinc here) was part of a wildly misguided “two prong” attack. The second came this month, with Commodore announcing that C64s would no longer be sold with a cassette deck in the UK. But what would replace it? Would UK users finally get a C64 bundled with a disk drive off the shop shelf?

Er, no. In spite of the C64 GS’s disastrous Christmas, Commodore were sticking with carts. From August, the company planned a £119.99 C64C with a four game cartridge and joystick. A C2N would still be available – separately, for £50.

“Cartridges are the ideal medium for games”, said Commodore’s Andrew Bell. Well, yes. Games were getting bigger and better and multiloads were a pain in the arse. But games had to be released on cart for this to be a success – and they just weren’t. Only 27 titles came out in total, and a move to finally bundle the C64 with a disk drive later that summer was ignored almost totally by retailers, angry at the constant price switches and confused offerings. It was, in retrospect, the beginning of the end for Commodore – who were comically out of touch with the market.

Commodore Format’s rise to the top of the tree was pretty much confirmed this month with Mirrorsoft giving the magazine the exclusive review of Predator 2. It was a pleasingly violent Operation Wolf sort of thing, and whilst the gameplay didn’t change it was great fun. Nice touches like the fleeing fat women and pensioners add to the carnage, too.

Viz finally arrived but was all graphics and no trousers, Elvira was a disk only adventure with incredible graphics and Narco Police almost succeeded at being a successful first-person shooter. It, by the way, was supposed to be a cartridge release – but Dinamic Software, along with almost everybody else, abandoned the idea when it became apparent just how costly they were to make and how low the sales were turning out to be. Ocean, meanwhile, were rebranding their C64 GS / cart boxes to include the words “works on any C64” in an attempt to clear up Commodore’s mess. Chaotic.

Most interesting this month was the first sighting of Gauntlet 3. The final adventure game in the trilogy was in 3D style this time around, taking the same perspective as PacMania. In spite of a favourable review (which we’ll come to next month), the game didn’t turn up in shops. The rumour at the time was that the programmer had “fallen ill”. This morphed into untrue stories that he’d had some sort of breakdown. In fact, programmer Martin Howarth was made redundant by developers Software Creations – who in turn were unable to get the game off the development system and onto tape. A handful of physical copies were sent out to members of the US Gold software club (who’d promised people who signed up the game), but they’re rare. Your best bet is to emulate it by getting hold of this file.

It’s true that the games were starting to slow down a wee bit, and with Hewson and others leaving the market (and taking their advertising with them) the page count was now down to 82 from issue 1’s 100. For an 8-year-old machine, though, not bad. Not bad at all. And we were in for a cracking summer, which we’ll talk about next time. CF 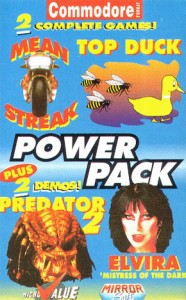 Mirrorsoft’s Mean Streak was a fun and bloody bike-racing game set in the London of the future. You could beat your opponents by being faster…or just blow them away with a rocket. The Predator 2 demo was a huge slice of level one which saw you machine gunning your way out of a drug baron’s hideout. There are some cool explosions in that one. Top Duck, meanwhile, was MicroValue’s lovely 1980s platform puzzler. Tape number 8 was topped off with a rolling demo of Elvira, showcasing some truly spectacular artwork. READ THE FULL POWER PACK FEATURE HERE