This issue had a subscriber’s newsletter. Read it here. Read the accompanying Power Pack feature All change! Well, mostly. After 14 issues guiding Commodore Format from a standing start to the UK’s […] 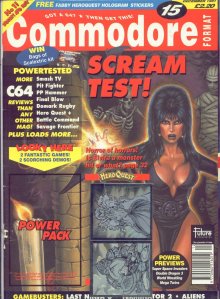 After 14 issues guiding Commodore Format from a standing start to the UK’s biggest selling C64 title, editor Steve Jarratt and sidekick staff writer Andy Dyer left to work on what was described as a new, “unnamed” project at Future. It turned out to be Nintendo magazine TOTAL!, initially produced in complete secrecy away from the Bath offices (such was the concern that license freaks Nintendo might try to stop it). The first that most people knew of it was when issue 1 arrived back from the printers, and it went on to be an enormous, iconic hit. Steve then launched Future titles like Edge and the original Official UK Playstation Magazine. These days he’s editing the hugely popular Bitmap Books range among other things, and in 2008 was named Games Media Legend at the Games Media Awards. He has been both a huge help and fantastic supporter of our little website, too. Thanks for CF, Steve! (read his interview with us here – Ed)

The top job was initially offered to existing deputy editor, Sean Masterson. But he turned it down, “keen to do other things”. Enter, from Amiga Power and Amiga Format respectively, new editor Colin Campbell and production editor Paul Lyons. “There’s something special about the C64″, said Colin, before the usual noises about Amiga games being overpriced (quite right -Ed). Sean Masterson remained deputy editor for a few months to help Colin get his feet under the desk: “if I’d left immediately”, he told us, “Colin wouldn’t have had anyone in the office with prior editorial experience on the title, a point he was quick to draw my attention to, and we had a good time, as it happens”.

With folk from other Future titles freelancing in place of the staff writer shaped hole left by Andy Dyer. The reviewing team this month was the largest CF would ever know, also featuring Amiga Power‘s Stuart Campbell and Mark Ramshaw, Your Sinclair‘s Linda Barker and James Leach, and Neil West from Sega Power. It gave the magazine a very different feel, but the three issues it lasted are remembered fondly as some of the very best. This winter, the Commodore 64 saw some of the greatest games ever to be released.

Elvira: The Arcade Game scored at 82% and Rugby: The World Cup notched up 90%. While CF raved, ZZAP! 64 didn’t like either title. It started a tedious “argument” in the pages of the Ludlow-based rival mag that raged for months, which Format sensibly ignored entirely.

Then there was the epic Smash TV. You can read our in-depth feature on it here, but the 97%-er is bested only by Mayhem In Monsterland. It’s a frantic blast ’em up based on an imagined and violent television game show of the future: that it made it to the C64 at all was impressive. That it did so with such style, utterly incredible.

Battle Command scored well too, a hugely ambitious 3D blaster which ran surprisingly well on a machine known for having headaches with the format. It was on cartridge, which is undoubtedly the reason it works. Following the C64GS disaster it was to be one of Ocean’s last cartridge releases, and even at the new reduced cart price of £14.99 it sold relatively poorly and is pretty sought after today. What could’ve been, eh?

Creatures 2 was nearly finished, with the Rowlands brothers this month coding the famous snowfall for the gruesome winter torture screens. The Early Warning! scanner showed blips for a new Simpsons game and Indiana Jones, Alien 3,  The Blues Brothers and WWF. They were all major, licensed titles and many were the only 8-bit micro versions of the game. The C64 was still kicking: Zeppelin was even recruiting for new programmers in this month’s CF. New team, bright future. It still felt good to be with the Commodore 64, and next month’s CF would be one of the best ever. CF

At least readers could make up their own mind about Rugby: The World Cup with the cut-down demo on this month’s tape. The same could be said for Elvira! MicroValue’s Equinox was a cute, five-year-old shooter and Dandy an absorbing, Gauntlet sort of thing. Good tape. Read our full feature on the tape, with some interesting secrets and stories, here. This issue also had some free Heroquest stickers, which you can see here.