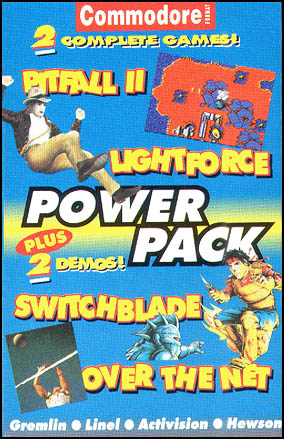 Summer 1991, particularly August, was a good one by northern European standards. In the UK, it was dry and mild. London hovered around the mid to late 20 degrees, and parts of Northern Ireland had their driest month since 1947.

August was traditionally the month British software houses took their feet off the gas a bit, with kids outside rather than indoors on their Commodores. Issue 11 of CF was unusually full of previews rather than reviews as a result. Terminator 2, Rod-Land, TurboCharge and a whole host of other goodies were imminent – but not until everybody was back at school and the nights started to draw in. So, what new to play? Well, August ’91s Power Pack proved to be one of the software highlights of the season.

This 1984 Atari 2600 game by David Crane was converted to the C64 by Tim Shotter. Even though the C64 shares the same microprocessor as the 2600, he decided to write the thing again from scratch. Tim sat just eight feet away from David in what Activision called their “lab”, so help was always at hand. From this, the team learned a lesson: don’t re-write perfectly good code from scratch.

“The thing is, we also had an Atari 800 conversion started on the same day as the C64 one”, remembers David. “The 800 one, the programmer translated the code directly. It seemed like it was taking forever whereas the C64 one showed daily progress…but by the time the 800 one was finished, the C64 one was still being debugged. The 800 one had code which was already working from the original.”

Pitfall 2 is a run ‘n’ jump platform adventure game. You’re placed in peril in Peru as Pitfall Harry, with four main tasks: rescue your niece, Rhonda, save your cowardly pet mountain lion, Quickclaw, collect loads of gold and then – finally- win the game by getting your mits on a diamond ring.

As Harry, you run and jump across 27 flick screens (which actually scroll horizontally at times too). A jab of fire will have you leaping across caverns or avoiding nasties. You can grasp at ladders and even swim in rivers; new areas are accessed by grabbing hold of passing balloons which will literally take you to new heights.

You might be forgiven for thinking that this all sounds like pretty standard stuff. And indeed, reviews of the time – even on a two quid budget re-release – were fairly lukewarm. But looking back now, we can see some genuine innovation here. This isn’t a totally linear game, for starters. You can do things in pretty much the order you’d like – a far cry from the “on the rails” stuff of most early ’80s titles. But perhaps more interestingly, you don’t have limited lives. If you fall from too high or stay too long underwater, you simply lose points and go back to a checkpoint (which itself was a first). This allows you to retry those tough bits over and over, and it’s something Pitfall 2 has never really had enough credit for.

Or, at least in the press it hasn’t. It’s clear this is a real favourite with Commodore Format fans. Its 1991 Indian summer on Power Pack 11 is remembered  fondly, and it’s  one of the few games on the covertape most people seem to have stuck with until the end – it’s a mapper’s paradise (you’re so fired – Ed). PACK FACT: It could have been even better on Commodore 64, and this does seem to have been behind the idea of coding it from scratch. But Atari’s marketing department insisted that every single version was the same, so the enhancements were cancelled. Boo!

This is Faster Than Light’s 1986 vertically scrolling shoot ’em up. There are five levels, and you just have to survive the waves of enemies on each one by shooting them as you constantly move  forwards. It’s considered  something of a classic on the Speccy, coming 26th in Your Sinclair’s best games of all time.  This sort of thing on the Commodore can sometimes be a problem because of the 25 character high screen; how relentless can the action be?

Well, pretty relentless here actually. And this is a shooter with the lights on: the constant waves of enemy attack come in daylight, and over mountains and blue sky, before ending up in, er, the dark. But that’s a mood thing, right? Right. It gets darker as you progress deeper into the chaotic landscape. Immensely playable, this, and there’s a fab Rob Hubbard soundtrack too. Sweet. PACK FACT: With autofire on, you can perform tricks that would otherwise be impossible. Some people say it’s the game that led to the Quickshot joystick being invented.

Now,  here’s something you don’t see too often on C64. From the same Italian team who  worked on Catalypse, Tilt and Chuck Rock, this is a demo of the beach volleyball sim’ Over The Net. It didn’t actually see a UK release until almost a year later, by which time a fairly brutal Commodore Format review (41%!) was largely forgotten. Andy Dyer felt the gameplay was frustrating followed by “blind rage and calls to the Samaritans”, but there’s a story here and it’s rather like the one the German programmers of Rolling Ronny had to tell us.

As with all Commodore games coming from outside the UK,  Italian-made Over The Net was programmed with disk drives in mind. CF only saw it on cassette. It’s somewhat telling that a review of the disk version in ZZAP! almost a year later is glowing, scoring 82%.  To truly enjoy this game and the range of options and gameplay, get the .D64 or find it on floppy. For once, we say ignore CF: Over The Net is fast, well-animated, fun with a friend and technically very impressive –  if you play it as intended. PACK FACT: The disk version has four different backdrops. To prevent constant loading, though, the tape version only presents this option to you once.

Core Design’s 1989 Amiga game casts you as Hiro, and you’re tasked with negotiating seemingly endless flip-screen caverns to retrieve 16 scattered parts of a sacred and powerful sword called Fireblade. It’s by Simon Phipps, the guy who also brought us Rick Dangerous, and the exploration punctuated by frantic action shows it. The power meter is an interesting addition, allowing you – by holding down fire for long enough – to dish out extra-powerful levels of violence.

The game’s red and grey graphics are an early nod at being artistic rather than merely functional; the sort of thing you’d see in an indie game today. It adds to the feelings of claustrophobia and urgency, as does the way some screens are only revealed one small tunnel at a time. Rather like Doom on the 16-bits a few years later, you’re always wondering what might be on that next bit of screen to be revealed – and it can be heart- pounding.

Gremlin’s platform slasher is certainly a different-looking beast on C64 than on, say, the Amstrad or Amiga original. But this short demo shows you how much fun it is to map and return to over and over. CF noted how difficult it could be to turn and be agile, perhaps not taking into account that’s part of the game’s attempt to make you feel trapped. This version does split opinions, that’s for sure – but we like it. PACK FACT: We’re publishing this on the day Ben Daglish died, so it’s somewhat fitting that Switchblade includes one of his best tunes – and one people used to load up the game just to listen to.

Worth it for Pitfall alone, but there’s enough variety here to keep you going all month. A much under-rated Power Pack.