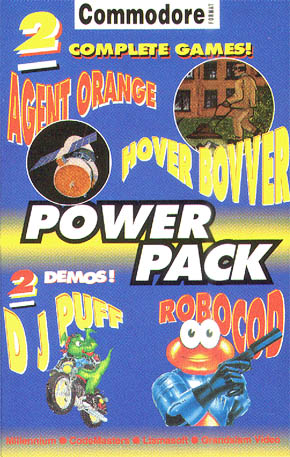 A look at issue 22’s Early Warning scanner tells a tale. It’s full of games that were no-shows or rush releases as the console market really began to bite. As the newly released SNES took up the shop shelves and kids’ bedrooms Lawnmower Man, an Arsenal game, Batman Returns and Fuzzball were eventually canned. What the C64 lacked in quantity over the 1992 summer holidays, though, it made up for in sheer awesomeness. This month’s Power Pack demoed two cracking platformers, and Jeff Minter was back on the tape too. Let’s have a look.

The story goes that when Millenium floated (stop this one before you even start – Ed) the idea of fishy platformer Robocod for the Commodore 64, the team behind the Amiga original reckoned it wasn’t possible. The DDS team took that as a challenge, managing to cram the entire pun-laden adventure into the 8-bit machine. Robocod got good reviews at the time, but more recently it’s one of those that divides 64sters down the middle. Heads up: we really like it.

The 16-bit original is so iconic that you almost certainly remember when you first saw it, but if you weren’t around in the early ’90s here’s the score. James Pond is a secret agent working for F.I.5.H. His arch enemy is Dr. Maybe, who’s mucked up Santa Claus’s North Pole toy manufacturing operation. Our hero – dubbed Robocod for this mission (the James Pond prequel never made it to C64) – gets the call to sort things out.

Robocod is a platform adventure with a dozen twists. Each of the ten levels is filled with possessed toys turned to the dark side by Pond’s nemesis: you’ll have to fend off teddy bears, Hot Wheel cars and giant Bertie Bassetts. The gigantic multi directional levels can also be navigated by finding dead smart stuff like aeroplanes, angel wings or your secret weapon…an extending robotic body! If you come to a snake infested pit, for example, you can push fire and your body will extend until it finds something to grab. At that point Pond will latch on and you can wobble across to safety.

Stewart Green was in charge of the team who had to get this one out for the Commodore 64:

“We were told it couldn’t be done. Not on an 8-bit. But we proved them wrong. The ’64 version is as big as the Amiga or ST and has the exact same map layout, number of baddies, objects and other stuff. We used seven layers of compression to get the biggest chunks of data into the ’64. The best thing is the speed isn’t affected.”

It’s a monster of an outing, too:

“Even now I can’t believe how big the game is. There are ten levels, each with a theme (sports, toys, sweets) and between 5 and 11 sections a level. Each section is 35 screens! It’s huge.”

“All the animation is included, so apart from the graphic and sound limitations, it’s an exact copy of the Amiga and ST.”

Ah, yes. Those graphics. That’s where Robocod gets a bit of flak. The game’s visuals were directly piped down from the Amiga version, partly to ensure the game was converted in full and partly as a time saving measure to make sure it got to the shops for summer ’92 (retailers were dropping the C64 all over the place by now. It’s why so many games around this period got dropped, or seem a bit unfinished – Ed).

There’s a problem with this approach. With very little modification to those converted graphics, Robocod looks washed out. This absolutely is the Amiga game in full with all of its joys and frustrations. The famous tune is there too. But compare how this looks to other famed platformers of the day like Creatures 2 or even this month’s budget outing DJ Puff (below) and it looks very dated. If you really want to live the C64 mantra of playability being what counts, though, you’ll probably be able to see past it and enjoy one of the biggest adventures on C64. Oh, and those penguins you have to rescue? They’re a late addition. The chocolate biscuit of the same name sponsored the game!

PACK FACT This demo just lets you wander around outside the castle and try out your Acme Expandosuit, but in the finished game you get to enter each level via its doors.

Short, cute, visually cracking platformers were enormously popular in ’91/92 on budget labels in the UK. They were often pretty similar, but kids didn’t seem to care. Codemasters couldn’t get enough and British programmers were engaged in a friendly game-off to see who could chuck out the best one in four weeks for £3.99.

DJ Puff is a dragon who Codemasters rather unfortunately tried to style like a ’90s “dude”. It’s embarrassing, it doesn’t translate to the game and it’s fortunately easily ignored. So yes, where were we? Puff is a dragon, yes. He’s also a DJ in a leather jacket, but try to block out that bit. His CD collection has been nicked so he must wander around a large, multi directional platformer to get them back, zapping anyone in his way. You can do that by breathing fire on your enemy or by chucking a bomb. It’s pretty obvious where you’re supposed to go, but by going off-plan you can find extra CDs and other bonuses. A mapper’s paradise, really.

Programmer Duncan Kershaw was impressed with Codemasters’ earlier platform adventure CJ’s Elephant Antics, and set about making a similar engine to build on what had quickly become a very popular style of C64 game. He worked with graphic artist Jonathan Temples (AKA Smyth), who also did the visuals for CJ.

“I became good friends with Dave Clarke (he’s CJ’s C64 coder – Ed). We even shared a house in Warwick whilst working at Codemasters. He thought the spin off was funny. We used to joke about my games and his. DJ Puff was clearly “inspired” by his, although to be fair, his were in turn “inspired” by New Zealand Story (which I think he worked on whilst at Choice Software). I released Stuntman Seymour after DJ Puff, which was of course all based on the same code.”

DJ Puff is up there with the best of the cute-till-you-puke platformers from 1992. The graphics are colourful and clear, and the animation of the main sprite’s wings is beautiful. Leave Puff long enough and he’ll even blink at you. Load up this, then load up Robocod, and see the difference. If you want to pick at the bones, then you’d have to say there are waaay too many leaps of faith involved and that could have been easily avoided with more thoughtful level design. The variety and surprising size will have you coming back for One Last Try, though. This is colourful, good-natured, skilfully coded fun. Everything that was great about C64 in ’92, really.

PACK FACT: This one level demo includes the game’s Easter egg. When some of the blocks are hit, the border flashes and changes to the title screen music. Hit it again, and it changes once more. “The hidden blocks are all over the game maps”, says Duncan. “When I sent my game off to the contract coders that converted it to the Amstrad and Speccy versions, they left my debug artwork on the blocks. So in those versions, the hidden blocks are all shown with numbers on them.”

The world’s greatest lawn mowing simulator was the latest Jeff Minter classic to be reheated this summer as part of CF‘s deal with the Yak Man: Hover Bovver was originally designed by Jeff’s Dad Patrick and was already ten years old by the time it was released here on Power Pack 22. It’s timeless, though, it really is, and it’s full of Minter humour and outrageous attention to detail.

So you need to mow the lawn, right (it’s how all the best games start – Ed). But you’re tight fisted and you don’t want to buy a mower. So you decide to nick your neighbour’s. You’ve got to mow 16 levels of grass without getting caught by the dude next door or his angry gardener. You do that by carefully tracking your way around each static screen and – get this – setting your dog on the pursuing neighbour. As you mow, the dark grass turns light. When it’s all light green – or “mown” – you’re done.

Your success depends on dog loyalty (you can only set Rover off to chew a leg every so often), dog tolerance (he hates the sound of the mower and if he runs out of patience he’ll attack you) and the mower’s heat. If it gets overloaded, you’re in trouble.

Hover Bovver is brilliantly straight forward, quirky fun and is probably one of the best early Commodore 64 games. It’s rammed full of British humour but that didn’t stop the US market embracing its simplicity and enjoyment either. TV Gamer gave it 4/5 in 1983, CVG 8/10 and both Home Computing Weekly and Commodore User settled on a perfect 5. If you’re not a Minter fan, this might be different and playable enough to convert you.

PACK FACT: James Lisney did the music for Jeff again here. Also behind the scores for Sheep In Space and Revenge of the Mutant Camels, he went on to be an international concert pianist. He’s been on Radio 3 and everything! Er, not playing C64 tunes sadly.

1987’s action game from A&F is a two-way shooter with an interesting farm management sim’ element bolted on. Across eight planets you’ve got to shoot down rival alien farmers, nick their seed pods and plant them. Finally, you harvest them to sell on for cash. There’s a lot of A to B to C flying and shooting with the added twist of being able to burn down your enemy’s crops, with the ultimate aim of getting to the end and finding the lethal Agent Orange which’ll destroy everyone’s crops except yours. Nice (by which we mean horrendous – Ed).

In ZZAP! 64, Julian Rignall described this one as like “gift wrapping on an empty cardboard box”. Pretty, but very little substance. He’s right: on paper Agent Orange sounds interesting and it’s certainly a good looking game, but it’s poorly executed. The enemies attack you right out of the gate which is window-smashingly frustrating, and the money you get for certain crops doesn’t really tally up. You wonder what the point is after about ten minutes, and then turn it off forever. Agent Orange‘s biggest problem is that it was released at the height of the Commodore 64’s powers, around the same time as stuff like Martin Walker’s Chameleon, the first Last Ninja game and Nosferatu. At ten quid, you could buy Uridium Plus and Paradroid for the same price. Most people did.

PACK FACT: Agent Orange was a powerful herbicide used by U.S. military forces during the Vietnam War to eliminate forest cover and crops for North Vietnamese and Viet Cong troops and WHO DECIDED THIS WAS A GOOD THING FOR A GAME PLEASE?

You’re getting a whole summer of fun out of Hover Bovver alone, but the first look at the long-awaited Robocod – tied in with the first review – is what made June 1992 so irrisistable for CF fans. Don’t forget DJ Puff, though. Loads of the Codies’ games have never had the praise they deserved because they arrived so late in the day – they’re well worth a gander. CF