Rolling Ronny for the Commodore 64 was ridiculously underrated

A feature on the under rated Rolling Ronny for the Commodore 64. 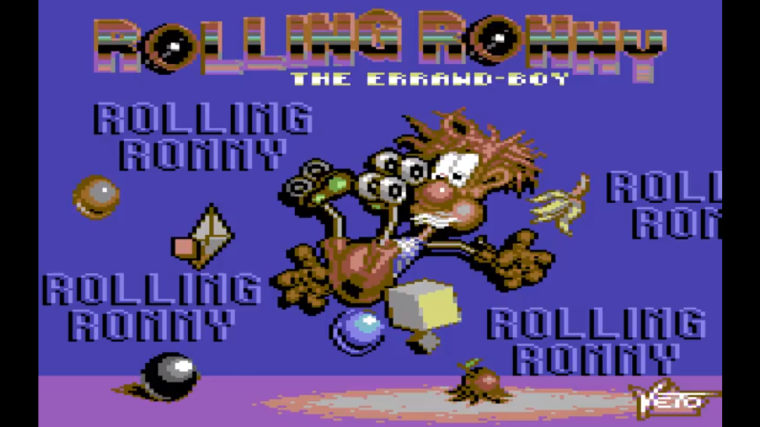 Christmas 1991 was a golden time for the Commodore 64. It can be argued that it was also the machine’s last great Christmas, but the plentiful games to arrive benefited from a decade spent uncovering the machine’s limits. The Blues Brothers (review) was a colourful platform game which swapped rotating coins for records but gloriously reveled in its Mario inspirations, and Smash TV was the entire insane arcade game squeezed into a single 64k load. A bloody sequel to twisted platformer Creatures was on the cards, and First Samurai (review) looked to be packing the kind of attention to detail you’d expect on the 16-bits.

Rolling Ronny was looking decent, too. Commodore Format had featured a well-received demo in the Autumn on Power Pack 13, and it gave a fairly typical taste for the game. You’re cast as the hero of the title, a delivery boy in the fictitious town of Fieldington who secretly works for Scotland Yard on the side. When the town’s crown jewels are stolen and scattered across town by the careless robbers, Ron’s the obvious one to call. It’s at this point you’re plummeted into the first level. At first glance, it’s straightforward left-to-right stuff. Sure, you’re wandering the levels in search of the treasure but you also need to earn enough money for your bus fare to get to the next stage. This is where the errand boy stuff comes in: as you dodge cars and the mutated animals of Fieldington (in a surreal plot twist, the local magic circle turned everything fluffy a bit demented), you’ll meet some of the town’s inhabitants. By doing them a favour – for example delivering a package – you’ll get coins. Pocket enough, and you can level up. Here’s the whole game:

Commodore Format was undergoing a period of change when the game was reviewed in issue 16, with a range of freelancers taking up the work that’d previously fallen to recently departed reader favourite Andy Dyer. Ronny was given to Stuart Campbell of Amiga Power, a magazine famous for its uncompromising reviews. Infamously, he savaged the game. “It’s a promising idea which looks fun at first”, he says. “It’s repetitive, lacking thrills and has a hellish multiload. Everything you need for a good game seems to be present and correct, but it doesn’t quite all gel together properly.” The game rates at just 45%.

Over in Germany – where the game was developed by Starbyte Software – Play Time magazine gave it 65%. “The colours are monotonous and the gameplay is slower [than the Amiga version], but overall….it’s pretty decent and a lot of fun.” ASM magazine was probably the most fair at the time: “it’s a successful conversion of a moderate game”, they said, noting that there’s only so much you can do if the design isn’t much cop in the first place. Back in the UK, ZZAP! 64 enjoyed what they saw. It notched up 87%, but even they flagged up the “hefty multiload”.

Ronny suffered from poor distribution in the UK. Retailers like WH Smith chose what 8-bit games to stock carefully from a select few proven publishers, which is why you tended to see the high street full of stuff by Ocean and US Gold. Virgin were publishing Ronny in the UK and were not an especially known C64 brand. This, combined with Commodore Format‘s review, probably killed it stone dead.

BUT HOW FAIR IS ALL THIS?

Not very fair at all, in our opinion. And history has proven Commodore Format – or, rather, an ill tempered Stuart Campbell – to be wrong. Rolling Ronny is almost unanimously loved among people who’ve finally had the chance to play it. The main sticking point does seem to be the repetition and lack of things to do – but it’s a good natured, colourful romp with some lovely humour. Folk who start playing it tend to see it through to the end. A quick scan of any C64 forum will present you with dozens of fans of the game, and when we asked readers about it on our Facebook page the praise poured in, particularly for its soundtrack:

Daniel Dearlove I think my parents might have bought Rolling Ronny for my birthday (first birthday with the C64). I made a remark about how bad it was, based on the CF review, and my mother reacted strangely. Presumably they returned it and I never saw the game. Got it off eBay years later and it’s not bad. The tape multiload was poorly handled, but otherwise it’s the kind of polished console-style game CF normally raved about.

Paul Kubiszyn I remember playing the demo non stop and absolutely loved it. I was gutted that I couldn’t buy the game anywhere in the UK

Jamie Morton Liked the soundtrack, but for me it was just another duff platformer. I may be misremembering but the gameplay was mute. The habit of turning every second game into another platformer got to be a little scandalous, especially with the movie and TV licenses.

Paul Graham I remember playing the demo for the first time. I liked the smaller sprites and arcade platformer feel it had. But what really stuck with me was the soundtrack. I wanted the full game at the time. But was years later and thanks to emulation that I finally got to play it.

If you can deal with the multiload (and by speeding things along these days you absolutely can), you’ll find Ronny more than 45% worth of fun. It’s difficult to think of another game Commodore Format got more wrong or why Ronny – rather than the dozens of other similar platformers – was chosen for a kicking. CF