We’re now a couple of issues away from Commodore Format‘s redesign. As we finished off by saying last time, the C64 world was changing and the magazine would do so in sync: this month, we see the first changes being subtly phased in to get readers used to a new feel. For the first time ever, the “More C64 Reviews Than Any Other Mag” box is missing from the top left of the cover. In its place, an arrow points down to the cover mounted cassette. And the contents page is different, too, featuring a font that would become the mag’s staple by the summer. More subtly, the use of colour was being increased. When CF launched, the striking use of large colourful headlines on a plain white background was integral to its design. Other magazines of the time were busy making perhaps far too much use of the newly available DTP technology, and Commodore Format‘s simple white look stood out. Now, though, colour was back in and issue 31 is awash with warm yellows, oranges and greens. There’s good reason for this, which we’ll come to when we look at issue 33.

A PLATFORMER TO GO

The penultimate cover stars of the old style CF were the kids of McDonaldland, surely one of the stranger licenses to grace the C64. The burger restaurant themed game was actually a bit of a homage to Mario and had its roots on the NES: it’s not a great conversion and it’s chock full of rough edges, but there’s a good game underneath it. Like Streetfighter 2, the main issue here seems to have been Virgin’s rush to get the game out before the C64 market died out completely. Still, as Trent says in this month’s editorial, fair play to them for having some faith in the machine. (Edit, April 2020: here’s our big feature on the game – Ed)

A LOT OF SPORT…AND SOME PAST MASTERS

Eight new games were in for review this month, the majority of which were – coincidentally – sports titles. Zeppelin’s Table Tennis had a “load time short enough to make it worth the occasional bash” (ouch!), said Dave Golder, and Codemaster’s £12.99 compilation Super Sports Challenge featured the excellent top-down racer Slicks. More interesting was the final arrival of two magnificent games originally reviewed a year ago but delayed for different reasons. First Samurai had been due to appear on Robert Maxwell’s Mirrorsoft label; when he, er, “fell off” a boat after spending his company’s pension fund the game was without a publisher. UBI Soft had picked it up, though, and Clur noted how this magnificent slasher puts “any Streetfighter to shame”. Then there was Nobby The Aardvark, which had temporarily been put on hold after publishers Thalamus suffered cash flow issues. Here it was, though, and the gloriously colourful platformer romped in at 96% too, dubbed “the sort of thing C64 owners deserve”. Both of these games are in CF‘s top ten rated games ever: you can read that feature here.

COMMODORE FLAW-MAT (THESE ARE GETTING WORSE – ED)

This month’s Face To Face reader Q+A was with Commodore UK managing director Kelly Sumner. We actually learn here for the first time that the C65 did exist: the company just chose not to release it commercially (you can sometimes find them on eBay today for literally tens of thousands of Euros). Kelly also sounds bullish about the C64’s future, saying it’s in “all the major catalogues” for Christmas 1993 and that they’ll “continue selling them until they’re commercially viable”. Unknown to the UK side of the company, though, Commodore’s parent US company was a mess: we’ll come to it in later installments of this series, but Commodore would file for bankruptcy within a year. Ultimately, the company never repeated the success of the C64, and its final attempts to do so in the aborted C65 and the confused offering of the Amiga 600 were the final straws.

THE START OF A LONG GOODBYE

This is the last month we see budget skinflint Roger Frames in his classic format:

Roger’s column had been a modest, black and white two pages tucked away at the back of Commodore Format issue 1, but writer Andy Dyer’s brilliant fleshing out of the character made him a surprise hit: by issue 3, artist Mike Roberts was drawing a monthly cartoon of his adventures to go along with the games reviews. As the C64 waned, of course, there was a problem: there weren’t enough games to continue justifying the column but Roger himself remained hugely popular. And so, he’d take on a different role in the mag – which we’ll talk more about next time. His last hurrah in this guise was ace, though, with the cracking Super Space Invaders, Rick Dangerous 2 and Space Gun all in for review. And his adventure was brilliant, too: inspired by Space Gun, Roger created fake crop circles in his garden and charged local kids to see them, spending the profits on budget games.

…Roger’s column was also the centrepiece of Commodore Format‘s great April Fool this month. Midnight Residence was described by Roger as a “platform pick ’em up shoot ’em up”. There were “530 levels”, “more colours on screen than ever before” and “perfect collision detection”. A screen shot shows level 3, where you find a machine that “takes you back to the early years of gaming”. The thing is, the game proved very hard to track down…you might be able to guess the rest. It caused quite a stir, with retailers desperately trying to find a game that did not exist. We’ve got a full feature on the entire episode here. A nice touch and a great month for the magazine. CF 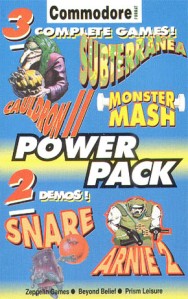 Five items on this month’s tape, leading with a demo of forthcoming blaster Arnie 2. The original had been 1992’s surprise hit, but this quickly developed sequel divided opinion (more in the next installment of Issue Review!). Subterranea was yet another blast ’em up, this time an old Hewson title dating back to ’88. The arcade action of Cauldron 2 (originally a 1986 Palace game) was a nice change, and then there was a demo of arcade puzzler Snare and Shoot ‘Em Up Construction Kit game Monster Mash. Read our full Power Pack 31 feature here.