A look at the December 1993 issue of British C64 magazine, Commodore Format. Lemmings is here! 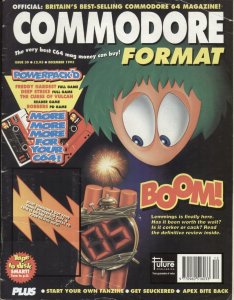 This month’s dramatic Commodore Format cover was devoted to the last C64 game you could buy from a shop shelf in the UK. And what a swansong. What a Christmas present! Lemmings was finally here! We’ve tried to determine exactly why it took so long to reach the breadbin, but stories conflict and details have been forgotten over nearly 25 years; what we do know is that there were a few attempts at Lemmings before Dutch developers E&E got the gig. In 1991, Juned Waheb (of Koshimo fame) submitted a one screen demo to Psygnosis which came to nothing. Psygnosis themselves had Jed Adams and Mike Dailly working on separate test versions, too. Here’s Jed:

“[our version] used characters for everything, unlike the E&E version that used sprites for the backgrounds. I had 128 men running around and following terrain. They weren’t Lemmings because i couldn’t draw!”

This version was cancelled when the guys were pulled over to work on stuff for the Amiga; eventually, the game was commissioned out of house to E&E. Their version is technically impressive, using keyboard presses (a cardboard overlay came inside the box) instead of pointing and clicking with a mouse. Each level is faithfully recreated, and the Jereon Tel tunes are a blast. If we’re honest here and flag up what most C64 fans know, some people like this version of Lemmings and others don’t, pointing to the small playing area and limited Lemmings. It was clearly a challenge to get this thing working on a Commodore. Editor Hutch awarded it 84% but not all of the team were convinced: a month later, Simon Forrester admits that on first sight he didn’t like the conversion at all but eventually softened.

With only re-releases of WWF2 and World Class Rugby making up the numbers this month, the contrast to Christmas 1993 couldn’t be more stark. Back in issue 27 twelve months earlier (Chrizzy Dizzy) there were 13 pages bought by advertisers for new games releases alone, allowing the mag to swell by a third for the festive period. But 1993 had seen technology leap forward, as punters looked beyond even the SNES: Atari’s 64-bit Jaguar launched around the same time as Mayhem In Monsterland, hot on the heels of Commodore’s own CD-32. Mortal Kombat was an arcade sensation, and there were rumours from Japan that even Sony was working on a console (can’t see it catching on – Ed).

With even the 16-bits looking wobbly, then, CF editor Andy Hutchinson’s decision to focus on the C64 as a hobbyist, enthusiast, almost fanboy sort of machine seemed more apt than ever. In place of games reviews, this month’s mix of features was rich and repeatedly pulled back to the idea that the future of the machine was in the hands of the readers. In Remix, Clur Hodgson explains how to make your own computer magazine using a C64. Over the page, Mayhem creators the Rowlands brothers continue their series on how to design a great game – and later still, Jason Finch is on hand with a heap of Techie Tips to make those games reality.

One of Hutch’s other aims with his version of CF was to make the mag like a little soap opera, with all the staff playing their part. The idea is you become emotionally attached to the crew and never want to miss an issue, pioneered on mags like Your Sinclair and Zzap! in its Rignall/Penn heydey. Anyway, it works to some degree of success again this month. Clur’s the sort of older sister, with a recipe for gingerbread Lemmings in the subs’ letter still remembered to this day. Simon is a sort of computer know-it-all with a penchant for punching people in the face, even when talking about Mini Office, and Hutch the cool bloke every kid aspires to be, as much in love with Budweiser and his vinyl collection as his Commodore 64.

In retrospect, Lemmings was the last great Commodore 64 event back in the day. CF had up until now built each magazine around a single game, turning – for example – Robocod into an occasion for issue 22 . From now on, though, CF itself would be the event. For many, it would be the only chance to do something new with their C64 each month. And next issue, as 1994 dawned, the mag would really put its cards on the table. See you next time. CF

Part two of Freddy Hardest led CF’s 39th tape: the second installment of this platform/explore ’em up was actually better than the first, but it still suffered from collision detection issues. The Curse Of Volcan was a full text adventure game by Richard Thompson, written in The Graphic Adventure Creator that’d come free with CF16. Deep Strike was a hugely dated arcade flight sim’, and then there was Cops And Robbers. It was the C64 version of a 1986 Vic-20 game, and it looked pretty much identical (ie crap). Most famous for the robber’s ability to shoot and kill a police officer, it nonetheless has something: neat touches here and there that warrant a extra play or so. Strangely, the archaic looking thing is the highlight of the tape.