A look at the January 1994 issue of British C64 magazine, Commodore Format.

“D.O. S.O.ME.T.H.I.N.G.”, read Commodore Format‘s iconic, call-to-arms cover story published two days before Christmas 1993. A new year was looming, and the industry had moved on from 8-bit micros. That Christmas day, kids were opening copies of Sonic CD, Zelda on Gameboy or Starfox on the SNES. Commodore Format was still here, though, and in Coming On Strong a magazine not exactly known for editorialising lay out its vision for the C64. “The commercial market is dropping off steadily. Nothing will stop a software manufacturer switching its attentions to a more profitable format”, said Simon Forrester. “[But]”, continued Hutch, “over the next year we’re going to prove it’s the fans of a machine that make it great.” CF encouraged readers to follow tutorials in the magazine and use the utilities on the cover tape to create their own games, start their own software companies or even publish their own magazine. It put its money where its mouth was, leading issue 40’s cover tape with utilities for the first time. Want to make neat enemies for your game? Follow the Sprite Fit feature and use the Monster Mash Editor on the tape. Fancy yourself as a fanzine editor? Interword was here, free, for your words of wisdom (although, famously, you couldn’t actually save your document: it was a disk utility, and Future Publishing had failed to adapt it for tape. If you wrote off to CF, they sent you a fix). Mayhem In Monsterland creators John and Steve Rowlands were on hand, too, with some more advice on how to design your game before you start coding – and as if to prove CF right, they also revealed this month that they were receiving 60 or 70 orders per day for their homebrew classic.

For the first time since CF‘s early days (issue 1-4, when it followed Future’s Format, er, format more closely) this month’s magazine also ventured back into reviewing serious stuff: Bull Electrical’s MicroDrive was a neat way of loading stuff faster but just a bit too late to the party, and Assembly was an excellent book on learning machine code. Most interestingly, Commodore Format dipped a toe back into the online world – not that “online” was really a word yet. In the ’90s, the few people who dialed the outside world with a computer accessed “bulletin boards”, usually set up by an enthusiast who’d leave interesting bits of software (legal and otherwise!) to download. Disappointingly – and not unlike a few features over the coming months in CF – this article dances around the topic over the space of a single page and doesn’t really get down to the meat. It smacks of what it probably is: a last minute space filler as the team got to grips with not having very many games to review anymore. It could possibly even have been because an advert was dropped with just hours to spare before the print deadline (this, as Sean Masterson told us, happened often).

Not that games had disappeared completely: text adventure Treasure Isle was in for a Power Test and notched up 82%. Jon Well’s neat little game was exactly the kind of thing CF were banging on about in Coming On Strong, and the adjacent page promised yet more from the big man in the form of City Bomber. Elsewhere, a re-release of Lethal Weapon managed just 40%, and Audiogenic made a second attempt to squeeze £10.99 out of people for 1992’s Graham Gooch Cricket.

But it’s that incredible sense of positivity you’re left with after finishing CF40. Hutch’s hope was to lift the spirits of kids still using a C64 when everyone else at school had a SNES, but also to encourage the older heads – maybe those who were also using an Amiga – to put something back into a machine they really loved. Incredibly, as we’ll see over the coming months, folk responded en masse and the movement is still going decades later. What a computer. What a magazine. CF 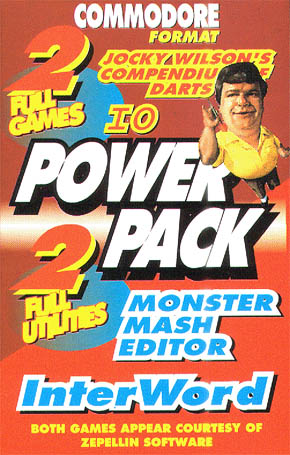 As we’ve said up there, utilities led the tape for the first time this month: a strong statement about the mag’s direction to readers more accustomed to a monthly dose of games. Word processor Interword had a problem: it had previously been disk only and thus you couldn’t save your documents (you could later get a fix by writing off to the mag). Monster Mash Editor was an easy way to make sprites for your games, propped up with some great tutorials in the mag. Games wise, Jocky Wilson’s Darts Challenge was on side 2 of the tape (even if was called something different in the mag), and IO (Into Oblivion) was a good looking but tough shooter; the first of a raft of games the Power Pack would see from budget stalwarts Zeppelin. It’s a decent mix.