Read Commodore Format  17 (February 1992) here.  Hyper links take you to specific articles. This issue had no subscriber’s newsletter. The previous month’s Commodore Format (CF16) had ended with a triumphant boxout […]

The previous month’s Commodore Format (CF16) had ended with a triumphant boxout entitled “the hits keep coming”. 1992 was the year the SNES would launch in the UK, but with Nintendo’s 16-bit wonder console mere months away the C64 wasn’t just holding on – it was seeing some of the best games ever. February’s cover game, First Samurai, was an incredible achievement on the beige 8-bit and you can read more about it in our interview with Vivid Image’s Mevlut Dinc here. It also features in our top ten games – with video – here. The game’s impressive multi directional scrolling and the gentle, falling cherry blossoms must have been way beyond the expectations of the C64’s designers back in the early ’80s. The computer might have been getting on in years, but the upside was that developers were using their decade of experience to wring every last drop of power out of 64k. The thoughtful slasher scored 96%, and wouldn’t have been over-rated at more.

And then there was Creatures 2. Highly anticipated after its monthly diarising (is that a word? I suppose it is kind of a word – Ed) in ZZAP! (before it went bust the first time) and then CF, the game was centered almost entirely around the original game’s static “torture” screen concept. As Clyde Radcliffe, you had a limited amount of time and resources to save your fellow fuzzy-wuzzies from violent death via roasting, freezing, chainsaw and, er, snowman. Jam packed with quirky ideas and featuring some of the most glorious C64 graphics ever, you’ll find people on YouTube today refusing to believe it runs on a standard machine. The only downside was its ridiculous level of difficulty and the limited number of lives. Sometimes you want to lose a life to see the spectacularly gory death sequences, after all! It rated at 90%, and here’s an interesting one: Apex tell us it is Creatures 2, not Mayhem, that they consider their masterpiece.  (Andy Roberts talks loads about Creatures 2 in our feature here – Ed)

DEATH OF A CONSOLE

Ocean’s Space Gun was the Manchester softie’s penultimate game released on the ill-fated cartridge format: if you find a version on circuit board today it’s pretty rare, too (the last one was Robocop 3, which we talk about next time – Ed). It showed again that 3D shooting can work a bit better this way than cassette or disk, but wasn’t really something to set the world on fire. Commodore’s attempt at competing with Nintendo and Sega’s 8-bit consoles had been a disaster, and they looked like a company without a plan or the ability to learn: they went on to make the same mistakes with the CD32.

This month saw the Commodore Format debut of a writer who’d go on to be a much loved reviewer and, eventually, editor: Dave Golder was parachuted in to write an explanatory guide to public domain software (he was working on Future’s Public Domain at the time, see), and to complement it PD puzzler Sensitive was on this month’s Power Pack cassette. Except there was a problem: Sensitive was in PD libraries but wasn’t PD at all. It had been commercially released in Germany via a C64 mag there, and absolutely wasn’t cleared for free copying. The story gets muddy after that – not that a genuine accident matters after 20 years. You can read the full Sensitive story in our tape 17 feature here, where we’ve tracked down the mag it came from. It’s a top game. Look at it:

Commodore UK might have failed with the C64GS and its confusing range of new Amigas, but – in spite of the company’s own incompetence- the C64 supposedly sold 100,000 new units over the Christmas ’91 period , cementing the machine’s place as the best selling home computer ever by a long way. The quote from Commodore was amusing, though, emphasising how much better a “real computer” was compared to a mere console. That certainly wasn’t what they were saying a year ago when pushing the C64 GS…

The C64’s popularity was still very real, anyway, no matter how terrible Commodore were. And as we headed into the Spring, a new era for the computer would begin. Fittingly, CF would have a new editor and new idea for the magazine to coincide. We’ll talk about that next time. See you. CF 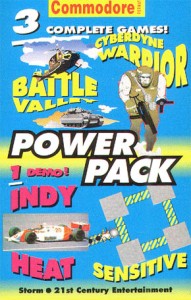 The Sensitive incident aside…Cyberdyne Warrior was Apex’ game pre the original Creatures, and you could certainly see the beginnings of it in this platform shooter – especially in the backdrops. Battle Valley was a side on war shooter in your choice of helicopter or tank. It was a late addition to the tape, and the sparse instructions meant readers didn’t get the most out of the game until a player’s guide appeared months later. Finally, there was a demo of Storm’s oddly washed out racer Indy Heat. Read our ish 17 Power Pack feature here.