This is not one of those dreams where you think it’s 1990 again. There really are three brand new Power Packs for you to download and enjoy on your C64, […]

This is not one of those dreams where you think it’s 1990 again. There really are three brand new Power Packs for you to download and enjoy on your C64, PC or Mac. They’re also all emulator and Mini compatible! Here are all the games, instructions and goss. Enjoy them and remember to share!

In July 2014, we released the first Commodore Format Power Pack in 19 years! It was a “tidying up” release of sorts – featuring both new titles and stuff that was supposed to be on the magazine’s covertape in the 90’s but never quite made it.

The tape went down so well that we released another one – Power Pack 63 – on October 31st!

And, yes, you loved it. So on 5th February 2015, there was one last five game Power Pack spectacular! Across the three tapes there are thirteen games. Many of them are exclusives to us, seen for the first time. From shooters to platformers to puzzle and arcade games and even an old school text adventure, there’s something  for every kind of gamer. They’re authentic .tap file that load and feel just like the old Power Packs did. 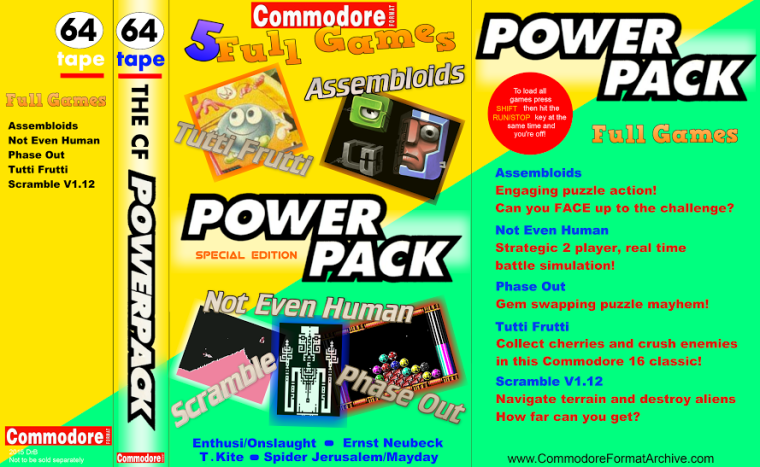 Anyone can play them on a C64 emulator for PC and Mac. If you want, you can even transfer them to a real cassette to use on your actual C64. EDIT, 2019: They’ll also work on your C64 Mini or  Maxi! Don’t worry – full instructions are on the tape pages. CF