Commodore Format was a pioneer in quite a few ways – the Uppers and Downers review boxes and Early Warning! scanner are still knocking about in magazines today. And CF was the first of Future’s […]

Commodore Format was a pioneer in quite a few ways – the Uppers and Downers review boxes and Early Warning! scanner are still knocking about in magazines today. And CF was the first of Future’s magazines to send out a personal letter from the editor to anybody who subscribed. Not every issue came with a letter, and some editors were better at it than others. Thanks to Andy Roberts, we’re able to produce the entire collection for the first time here.

Remember once you’re browsing the gallery that you can read any of the subs letters in high quality by clicking “view in full size” at the bottom right of the screen. You can click to zoom in and see them at their original size, too. Have fun and remember to give some of Clur’s recipies a try!. CF 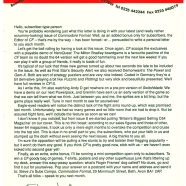 SUBS LETTER, CF13. October 1991. Steve says sorry for not getting a subs letter out with copies of CF12. And he fesses up to a clanger on the cover, too. Note his signature this month. Pisstaker…

SUBS LETTER, CF14. November 1991. Rival magazine ZZAP! 64 has closed (for the first time, and we all know the rest). Steve Jarratt pays tribute: “It gave me my first break. And here I am, five years later. Still, er, working on a C64 magazine.”

SUBS LETTER, CF15. December 1991. Steve Jarratt and Andy Dyer have gone! Colin Campbell’s the new editor, with Paul Lyons replacing Andy. And this is to be the only subs letter Colin will ever send out. Boo.

SUBS LETTER, CF21. June, 1992. Jason Finch joins Commodore Format! And which old-timer has rejoined CF for a one-off feature? Clue: his piece is littered with words like “hatstand”. 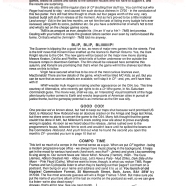 SUBS LETTER, CF23. August 1992. The Face To Face interviews start this month. Commodore UK manager Kelly Sumner still didn’t quite seem to grasp why it hadn’t happened for the C64GS. 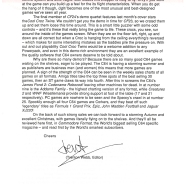 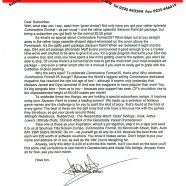 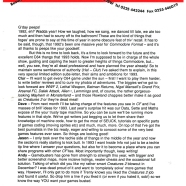 SUBS LETTER, CF28. January 1993. The last months of the Commodore 64’s commercial life. By the end of the year, software won’t be on the shelves and Commodore Format will be a very different magazine.

SUBS LETTER, CF30. March 1993. Commodore Format gives the front cover to a game that will never be released. 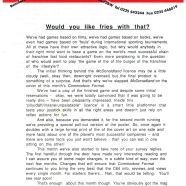 SUBS LETTER, CF31. April 1993. The LOLS are all in the PS for this one on page 2. Wonder who was getting the phonecalls…

SUBS LETTER, CF33. June 1993. It’s the month Commodore Format relaunches. Everything – even the type and width of the paper that the magazine is printed on – is different. “The C64 scene is changing”, says Trenton. “And so are we”.

SUBS LETTER, CF35. August 1993. No subs letter came along with CF34, probably because that edition was 84 pages – the biggest CF had been in years!

SUBS LETTER, CF37. October 1993. Commodore Format give readers their first chance to play one of the most technically impressive C64 games ever. And Simon Forrester joins the team. 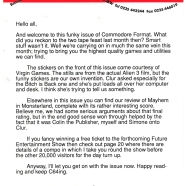 SUBS LETTER, CF39. December 1993. Hutch’s Fave Dance Tunes Of The Moment. Which ages the magazine if nothing else on these pages does… 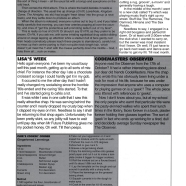 SUBS LETTER, CF40. January 1994. In a world where even the SNES is looking over its shoulder at newer, 32-bit systems Commodore Format is – unbelievably, brilliantly – still around. With the magazine officially now in middle age, CF40 was the famous “call to arms” edition in which Hutch told readers that if they wanted to keep the C64 alive, “you’ve got to do something”.

SUBS LETTER, CF41. February 1994. There’s a complete guide to Power Pack utility Interword this month – a word processor previously only available on disc. Unfortunately it becomes apparent when readers try to use the damned thing from tape that they can’t, er, save anything. D’oh!

SUBS LETTER, CF42. March 1994. Back in 1991, Steve Jarratt told readers that computer magazines had agreed to limit the number of full games on their covertapes. The idea was to try and protect games sales and the industry as a whole. But whizz forward to this month in 1994, and the C64 world is very different indeed. Andy Hutchinson tells subscribers that the same software houses are approaching CF to try and license them everything they’ve got for inclusion on the Power Pack.