A look at the August 1993 issue of UK C64 magazine, Commodore Format. Hulk Hogan cover, Lemmings on the tape. 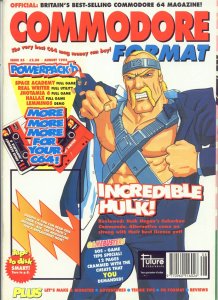 Commodore Format 35 was Trenton Webb’s last. He’d joined the magazine at CF18 as its third boss; his 17 issues make him the longest serving editor and his time is defined by an infectious enthusiasm for the magazine and a huge warmth for the Commodore. In truth, the computer had seen its most serious decline during his time on the mag, but looking back now you’d never guess it. He just made you feel happy to own a C64.

“[Commodore Format] had the feel of a University campus newsletter editorial team”, he tells us. “Only we got paid and the hardest journalistic question we had to ask was ‘when is game X about to be released?’. We cited the pocket money rule – imagine you’re a 13 year boy, who’d saved up for months to buy this game. You make sure your review would save them wasting their money or be sure they didn’t miss out. But the real secret was nothing more than getting a team of people who cared about what they did. James, Oli, Lam, Jane…they all had a passion for their magazine, had great design and writing talent and loved playing games.” CF went on to do great things without Trent, but it’s fair to say it never quite reached the same heights in his absence. You can read our full chat with him here – kudos, Trent.

Sniff…yes. Yes, we’re here to talk about CF35, right? Right. Hulk Hogan was the cover star, becoming the first hero to grace two separate covers of CF (Hulk had previously been seen throttling Bart Simpson on the cover of issue 16; only Mayhem In Monsterland matched the wrestler’s feat). His movie, Suburban Commando, had been picked up by Alternative Software and converted into a mix of shooting and platform action, with a clear console influence in the latter sections (the springs are a direct lift from Sonic, for example). With a “stonking soundtrack” and some huge, pleasingly chunky sprites it’s way better than the film it’s based on. Clur rated it 82%. (By the way, SC programmer Jason Aldred is back making C64 games. Talk to him and find out more on his Twitter, @JasonNapalm – Ed)

With just re-releases of Turbocharge, Mercs and – weirdly – Microprose’s 1987 hit Pirates making up the rest of the review section this month, it was another solid set of features that really made Commodore Format worth the read. The best is on page 19, where Dave Golder meets the owner of a rare SX64 – the “portable” C64 that Commodore put out in 1984. Amusingly, the owner says he takes it to work to play on his breaks “because it’s so easy”. It certainly couldn’t have been, even by the standards of 1984. Weighing “above the size of five house bricks” and “needing wheels”, CF‘s love letter to a funny little machine is nonetheless a fantastic bit of writing. Many younger readers didn’t know about the SX up to this point – respect to Dave, whose enormous contribution to Commodore Format is criminally under appreciated. Dave left the mag this month too, which we’ll talk more about next time (for there is a story there, mm-hmm). Meantime, you owe it to yourself to read this one – it’s brilliant.

Speccy bible Your Sinclair published for one final time this month. It was so loved that even CF ran a mini obituary in the Snippets section. Meantime, it was getting hard to fill the pages of Amstrad Action and it’s worth noting that software publishers were beginning to drop the Atari ST and even Amiga.

What the C64 had over these machines – and still has to this day – is an incredibly proactive set of users. We start to see the first signs of a new C64 era this month in Commodore Format, with homebrew shooter Breakthrough previewed and adventure game Sceptre of Baghdad finally getting a release. The commercial softies were abandoning our favourite micro computer, but coders in bedrooms up and down the land were ready to take their place. And with perfect timing, a new Commodore Format editor who shared their philosophy was about to take the wheel. CF

Finally, some Commodore 64 Lemmings! The Breadbin was pretty much the last format to see the little critters, as Psygnosis and a variety of devs had struggled for years to get the game running on the machine. But here was a whole level to play, with a release slated for Christmas. It was joined on the tape by text adventure JHotamia 6, Elite’s ancient sci-fi sports game Space Academy and Breakout clone Hallax. The ‘Pack is completed by PD utility Demo Writer, which let you scroll massive letters on your monitor and do, erm…nothing else. Still – you could trick your mates into believing you could code with it.