A look at the October 1994 issue of British C64 magazine, Commodore Format.

Exactly four years in to Commodore Format‘s run, it was just the hardcore C64 fans remaining. Bearing that in mind, it is hard not to see October 1994’s cover as preaching to the converted. In the same week that series one, episode one of Friends aired in the US, the mag asked: “Which would you buy for £64? –  124 brand new C64 games or one console cart?” Inside, each of the CF team take it in turns to spend sixty four quid on Commodore stuff; Ollie Alderton opts for a mix of art package and full priced games like Liverpool, Simon Forrester picks an assembler, Mini Office and a compilation and Dave Golder goes for an Action Replay cart, programming book and a haul of games including Rod-Land. You can see the point of the piece in the abstract, and the team’s selection’s reinforce the huge number of things a Commodore could do compared to a console (draw, program, make music). But you can’t help but think that anybody reading a C64 magazine in the same year Sony announced the Playstation is already on the bus. Nice feature, but as subsequent letters to the mag would say – it just seemed a bit needless.

Much more interesting was the arrival of yet another cracking game from Germany. Fred’s Back 3 was another offering from the Electric Boys, and as Dave Golder says Fred couldn’t look much more like Mario if they’d tried. It’s a “colourful world of floating platforms, secret rooms and exceptionally dim nasties”. The latter part is key here; the game doesn’t develop that much, but the pace and technical achievement make it a hugely enjoyable platform romp. Once you’ve finished it, it’s one of those you don’t mind bashing through again. CF had done well to unearth and promote this German stuff, and it’s only a shame more of it didn’t reach the UK sooner. It’s another one that “borrows” those platforms from Creatures, mind:

Even though the games were starting to fall in for review again in recent months, CF hadn’t lost its focus on encouraging us to make our own stuff. As it kept repeating – we were its future. This month Russ Michaels explains how to create loads of new, non-standard colours using much the same methods Apex demonstrated in Mayhem In Monsterland. It’s quite clever: by either flipping very quickly between one colour and the other or by using two colours on alternate lines, new shades become apparent to the human eye. It’s a trick, but on a real C64 with TV it works – and now you know why some colours in Mayhem “glow”. A demonstration on the Power Pack neatly tied in to the piece.

A mention of issue 49 can’t pass without a mention of Edge editor Tony Mott’s guest appearance. In 1994 he was already at Future Publishing, and this month wrote about the roots of console shoot ’em ups in C64 games. It’s actually a beautifully presented piece, visually charting the journey from Space Invaders to, say, Super Metroid on the SNES via Exile and Druid on the Breadbin.

And that, along with the usual pile of games and Techie Tips, PD and letters, is issue 49. At 34 pages, the mag was really packing a (pint-sized) punch: the addition of some hugely requested games on the Power Pack (see below) added massively to the whole package, and this was now pretty much the only new C64 thing you could buy from a shop shelf. Next month, Commodore Format would do the half-century. But it would be a bitter sweet celebration. See you next time. CF 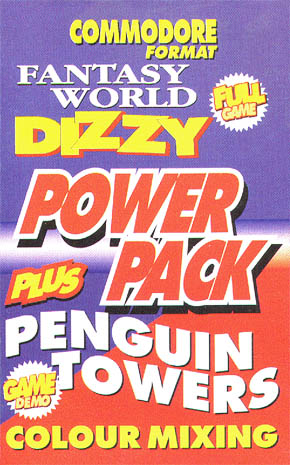 Dizzy games are a bit “Michael Caine”, to quote CF‘s classic response to its fawning fanboys. That is to say he’s beloved of fans, but does tend to appear in any old rubbish. Throughout its five-year run, Commodore Format often let on that its team were baffled by the enduring popularity of the ovoid adventurer. But perhaps that’s an age thing: the Dizzy games were challenging but solvable A to B to C affairs. Completing them was immensely satisfying for a developing childhood brain, but perhaps an obvious slog to those any older. Whatever the team’s thoughts, Fantasy World Dizzy appeared on this month’s tape as part of Future’s deal with Codemasters that also brought us last month’s Tilt. The game had been much requested, and readers were thrilled – which is what it’s all about, eh? The tape was completed with a demo of Penguin Tower (reviewed back in issue 44) and a Colour Mixing demo we’ve mentioned up in the main feature.