This issue had no subscriber’s newsletter. Read the accompanying Power Pack feature The January 1991 issue of CF actually appeared in time for Christmas, hitting Menzies and Smiths on December […]

The January 1991 issue of CF actually appeared in time for Christmas, hitting Menzies and Smiths on December 20th. It was a fairly standard Yule in the UK, characterised by a lack of snow and The Italian Job on BBC1. Late nights through Christmas week featured televised messages from squaddies out in the Gulf, and on Boxing Day Leeds United beat Chelsea 4-1 in the old Division 1 as storms battered the country.

Save for a bit of snow sprinkled across the contents and subscription page, there isn’t much sign of the season of goodwill in CF4. Readers love a Christmas special, but publishers of monthly magazines don’t: the front cover ages quickly, with punters less likely to buy a  magazine with a festive cover after the big day. The delay in the magazine arriving overseas is an issue, too: a Christmas-y cover back in the 90s would be on sale in Canada nearer to Easter.

There was a theme to issue 4, though, and it was a sure fire sign that the “humble” C64 was still alive and kicking. This month’s Commodore Format was a movie special, with five of the year’s biggest films getting a conversion to the beige 8-bit. Robocop II was the pick of the bunch, with a demo on the Power Pack to accompany the 90% review. It’s a gaudy, cartoony looking game – all down to its roots on the NES – and the main sprite’s “realistic inertia” makes Robocop a bit of a chore with the joystick. But with twelve levels plus sub games and hidden rooms it made the most of the new 512k C64 cartridges. The Commodore wasn’t dead yet…

A fascinating piece just over the page was all about how films ended up on the C64. Now Showing At A C64 Near You spoke to Dominic Wheatley from Domark, who turned down the chance to make an 8-bit version of Biggles (“they tried to sue me”). Mirrorsoft – who’d just paid £200,000 for the rights to Teenage Mutant Ninja Turtles – revealed that film producers were sending dozens of scripts to them, desperate for the extra exposure they realised computer games could now give them. There was a problem, though: “games take 7 or 8 months to finish, so we’re producing things like Back To The Future III before we’ve been able to see the finished film”. And some stars like Michael J Fox were also precious about their own representation on the C64 – demanding impossible colours, for example. In all, it’s a fantastic piece of real journalism. CF moved away from this sort of thing in the following year, as it became almost entirely a games review magazine. We could have done with far more stuff like this –  a damned shame.

SOMETHING CALLED “THE INTERNET”

Elsewhere this issue, Andy Hutchinson was back with part two of his series on getting online with a C64. The focus this time around was on the American Compuserve network. British CF readers could barely afford a game a month, so the idea they’d be ringing up and downloading games or posting in early “forums” was rather fantastical. The potential of communicating with the world was compelling all the same, though, and the screenshot of a digitised Madonna – downloaded from the art forum library – really captured the imagination. Incredible things were possible with a “mere” Commodore…

Back to reality, and a mixed month for the magazine’s surprise star Roger Frames. His column was now in full colour and issue 4 was the first to feature what would become his trademark monthly cartoon adventure…but he also ended up in prison! With a C64 smuggled into clink, though, he was able to review Hewson’s re-released Eliminator (ace 3D racer) and Zeppelin’s Arcade Trivia Quiz, which was pretty much like those machines you get down the pub without the annoyance of a pissed-up know-it-all lurking behind you. Cool.

Finally, the reader survey results were in this month. The average Commodore Format fan was aged 14-16. Most spent “up to £20” a month on software, working out at a C64 market of £8m a year from CF fans alone. And 4% of readers didn’t own a joystick (odd).

With that £8m figure in mind, it’s perhaps not surprising that this was the last issue of CF that followed Future’s Format magazine blueprint – a mix of serious and leisure – so closely. Over the next few months, the comms section and interviews would slowly disappear. By Easter, CF was pretty much a games mag entirely. Already, an era of the magazine was over. CF

ON THIS MONTH’S POWER PACK 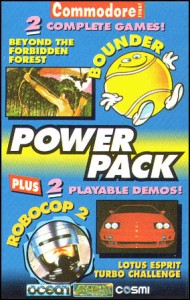 What a christmas present! READ THE FULL ACCOMPANYING POWER PACK FEATURE HERE.  Kids spent the 1990 holidays terrified at Beyond The Forbidden Forest, a blocky looking but incredibly atmospheric horror title. Bounder, meanwhile, was a bouncing tennis ball ‘sim – don’t let him fall down the cracks! – with oodles of personality and was a real “just one more try” game. Level one of the month’s rave review, Robocop II, was there to give a bash – and Lotus Esprit Turbo Challenge confused everyone. Press fire as much as you like, you still can’t play this “rolling demo”. (Er…it probably just wasn’t finished enough and rushed out at the last minute…but disappointing, for sure! – Ed)