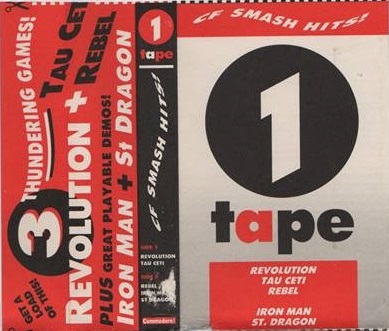 Chris Anderson’s fledgling Future Publishing was actually saved by a covertape. As you can read in our extended feature, Amstrad Action issue 4 sold by the truckload because it had a games cassette stuck to the front of it. That convinced a wary WH Smith to continue stocking the mag; from then, the covermount was something which the business forged both its reputation and success on. The same principle is what sees Official Playstation Magazine come with a calendar, coaster or stickers even today.

No surprise, then, that issue 1 of Commodore Format had some software taped to the cover. Though it would later become known as the Power Pack, the first cassette was known as CF Smash Hits (the name was changed to avoid legal issues with Smash Hits publisher EMAP). Initially, there was no plastic box either. Instead, the tape was fixed to a piece of card you could turn into an inlay (for the real anoraks, there’s a whole article and photo on that here). The cassette led with a previously unseen corker.

C64 coder Simon Pick had been unemployed in 1989, quickly jumping at the chance to go and set up the development side of things at The Sales Curve and be involved with stuff like SWIV and Rodland across a variety of formats. He’d been filling in his days coding a little shooter called Revolution, which was abandoned when full time work came knocking again. Looking to pick up something exclusive for its first tape, Future Publishing offered Simon £2000 to tidy it up for Smash Hits 1. And even though it’s – in Simon’s own words – “unfinished but playable”, you’d never know it wasn’t complete. You control a static ship surrounded by a forcefield. You don’t move about, you turn around on the spot, never leaving the centre of the screen. And you simply shoot everything that comes near! You can see its inspirations: there are bits of Gyruss and Nemesis, but it’s pretty unique. It’s got some great atmospherics, a nice range of power ups and – yoiks! – a Martin Walker soundtrack (which, in typically organised Steve Jarratt era Commodore Format style, tied in to a music feature in the magazine). Revolution was a true statement much as anything, a signal to the industry that CF‘s tapes weren’t going to be full of filler.

This groundbreaking, ambitious science fiction game dates back to the Speccy in ’85. On the planet Tau Ceti everything was just fine until 2150, when a plague killed everyone and left it in the hands of robots (irritating – Ed). These machines have run amok, slaughtering anyone attempting to come and clean up the territory. So, yep, it’s down to you to get your ass there, collect a bunch of rods from various cities and take ’em to a central location to deactivate the robots. At the time, this all sounded incredible. And it kind of does now, doesn’t it? Usually, games from this era with a grandiose backstory belie fairly standard shooty or platformy stuff, but not here: Tau Ceti is a thoughtful, complex 3D affair which tests your brain and reflexes. It can get relentless when the combat starts, and plenty of younger players found it a bit too much – but in middle age, it’s worth going back to. Oh, and the C64 version is by John Twiddy who’s in this month’s mag too. He was one of the chaps behind the development system for the ill-fated C64GS console (we really should make that the GS’ official full name – Ed).

This one’s by Gang Of Five, best known for their Dan Dare games that came out on the Virgin label. And it’s DD that inspires this strategic shoot ‘n’ search maze affair, with its roots clearly taken from the game’s mirror puzzle sub section. On release in 1987, Rebel got middling reviews. CF‘s own Steve Jarratt was at ZZAP! when it came out, and summing up he deemed it enjoyable enough but spoiled by a daft control system.  Julian Rignall felt it was good, but didn’t justify the ten quid price tag. Three years later as part of a covertape, then, can’t be bad. Virgin, by the way, gave CF this game for free in exchange for running the next bit of software on our list…

To give this its full name, Ivan Iron Man Stewart’s Super Off-Road Racer is a relatively unknown coin-op which Virgin saw the worth in and hired Graftgold to convert for some C64 fun. It’s a top down racer full of dips, bumps and bonuses. You can upgrade your vehicle in a shop, but best of all is the multiplayer fun. If you use both ports and the keyboard, up to three people can play at the same time. This demo showcases everything pretty well, including its flaws: on review in issue 2, Steve Jarratt notes that it’s virtually impossible for left-handed people to play the thing! It notches up just 65%. Iron Man is Graftgold’s last C64 game: originally formed by Andrew Braybrook and Steve Turner, they were responsible for stuff like Uridium and Paradroid. But, as with everyone else come 1990, the Amiga and consoles were beckoning.

Random Access (Silkworm, Ninja Warriors) coded this Jaleco arcade conversion for Storm, and this is a preview of the five-level game.You pilot a mechanical dragon, and unusually use the beast’s armoured tail as a weapon. By flying in a circular pattern, for example, you have a shield. It’s pretty unique stuff, with loads of parallax scrolling, waves of enemies and buckets of power ups. In the end, St. Dragon was delayed until the following March. CF’s review notes its technical excellence, but reckons it’s a bit easy. We’d also say it’s a bit on the pedestrian side. Good for younger gamers, though.

One exclusive game, one game that was selling at retail for a tenner a few years’ earlier, the depth of Tau Ceti and some nice previews. More than enough to banish the back to school blues, although Tau Ceti‘s brilliance is probably best appreciated now in our, er, Autumn years (don’t start that again – Ed) CF