A look at the Monty Python game for the Commodore 64, and a chat with game designer Simon Phipps about the experience,

Crivens! (Oh, I see how this article’s going to go – Ed) In the first of our series on unusual games licenses from off of the ’90s, we poke around Monty Python’s Flying Circus and we talk to Simon Phipps about the creation of a very unusual piece of software. We shall start…this…article…NOW! 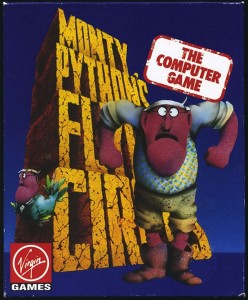 When Monty Python’s Flying Circus was released on the Speccy, CPC, Amiga, ST, PC and our beloved Commodore 64 in October 1990, the games press (largely made up of 20 and 30-somethings who’d grown up on re-runs of the surreal comedy series) wrote reviews that presumed everyone knew as much about the show as they did. But think about it: Python debuted in 1969. In 1990, the average age of a games mag reader was 12. Silly walks, parrots and not expecting the Spanish Inquisition were things their parents joked about.

Let’s assume for a moment you were one of those kids and we’re back in 1990. Here’s what you should have been told.

Monty Python were a British surreal comedy group. Terry Jones, John Cleese, Michael Palin, Graham Chapman, Eric Idle and token American Terry Gilliam – the Silly Six – made 45 episodes of Monty Python’s Flying Circus for the BBC between 1969 and 1974. It could loosely be called a sketch show, but was famous for its groundbreaking stream of consciousness approach, aided by Gilliam’s animation. Recurring characters like the Nude Organist redefined what was acceptable on television at the time, and sketches involving dead parrots or lumberjacks are arguably more famous than the show itself.

The group experimented with things like the ‘cold open’ from series 2. That’s where a sketch starts before even the show’s titles have begun and is used to create impact. It’s common now but certainly wasn’t in 1969 when Michael Palin spent an agonising 45 seconds running from the sea to the camera to announce the start of the show. And that “fourth wall” thing where actors address the camera like in House of Cards? Hollywood started to do that after John Cleese began breaking out of his own sketches.

AND NOW FOR SOMETHING COMPL…(STOP THIS – ED)

So. We know what you’re thinking. How do you make a computer game out of all this? Virgin gave the task of making it for C64 – and the five other big formats of the time – to Derby based Core Design, who you’ll also know for Rick Dangerous, Chuck Rock and a certain Tomb Raider. The game centres on Michael Palin’s leading character, the loud and dim-witted Gumby. During brain surgery, the hanky-wearing hero’s brain does a runner. It splits into four pieces, escaping into Monty Python‘s surreal world. Unless you retrieve it, Gumby’s hopes of becoming an accountant are over.

Monty Python has four levels for each brain segment and in each segment Gumby takes a different form. As himself, he hops around platforms. As Gumbyfish, he floats around a maze of pipes. In the sky, he’s Gumbybird and in bonus rooms he’s a head on a foot. Yep.

Whatever you are, you have a supply of fish to throw at the enemies stopping you getting your brain back, and that’s where a lot of the characters come in. There are dead parrots, vikings on wheels, people doing silly walks and flying feet. You platform, you float, you shoot and you, er, collect sixteen tins of spam a level to recapture pieces of brain. It’s straightforward, but where Monty Python’s Flying Circus really wins is in its brilliant capturing of the show’s vibe in 64K chunks. The graphics are spot-on recreations of Gilliam’s animation, and things get off to a great start as Gumby is pursued by a man hiding in a bush. The game arrived just in time for Commodore Format‘s first ever issue, and is the second game to be reviewed in the mag. C64 legend Sean Masterson loved it, praising the way different Gumbys behave in different ways (“be a fish! be a bird!”) and noting its surprising depth (there are hidden rooms all over, and you can complete the game without collecting all the brain parts: you just can’t see the end sequence, so you have to try again). Sean scored it at 87% for CF: “a game with brains. And spam.”

THE MAKING OF SOME VERY SILLY SOFTWARE

Commodore Format caught up with former Core Design man Simon Phipps to find out more about the making of this unusual and hugely enjoyable game:

Simon! Pleased to chat with you, man. So what was your involvement with Monty Python’s Flying Circus? I coded the Atari ST and Amiga version, drew all the art for all 6 versions and built all the maps and gameplay. Chris Long did all the coding on the Commodore 64 version.

Monty Python is such an unusual thing to have to turn into a computer game. Where did you even start? Core was approached by Virgin with the opportunity to either adapt Judge Dredd or Python as a game. For some reason, I think probably because of our previous release of Rick Dangerous, we didn’t get the chance to make Dredd.

With Python‘s wild variety of sketches, the impulse would be to make a massive mini game compilation, each one featuring a sketch from the show. But to do that successfully on six different formats would have stretched our team beyond our limits – so we had the choice of either making, say, 4 mini games based around 4 sketches, or, embrace all of the show’s characters and pull them together in one game.

The guys at Virgin preferred this approach, but it didn’t stop them pushing for us to add mini games and very specific set-pieces all the way through development – we managed to get the Argument Sketch in there as a specific mini game (sadly absent from the C64 version – Ed), but everything else in the game was achieved using a core set of common functions.

The big stipulation from Virgin at the start of the project was to make the game as different from Rick Dangerous as we could. I think they feared we’d simply do a repaint. We would have never done that, but that did set us on a course for trying to create something that concentrated more on mastering the central character’s various controls than we should have done.

Later during the project, the guys at Virgin asked for more traps and elements from Rick, so we changed direction, pulled back on the control difficulty and I reworked every single one of the levels.

The hardest thing about the design of the project was that EVERYONE had their own favourite bit of Python that simply HAD to be in the game, and that they could recite by heart. Unfortunately that meant that a lot of the design meetings with our publisher tended to derail quite a bit.

The graphics are really unusual. It’s a distinctive look – can you tell us about their creation? It must have been a challenge recreating the show’s Gilliam style. I fell in love with Terry Gilliam’s animation style when I was about 8 – I remember seeing a feature on his work on a TV programme called Bob Godfrey’s Do It Yourself  Animation Show (Holy smokes! – I found a link: https://www.youtube.com/watch?v=PUZJKzNH9wA) and that stayed in my mind for years.

So, when the opportunity came to work on the game, I decided to try my best and emulate the style. The great thing about the style was that it would me to create sprites of all the various live action and animated characters from the show using the same consistent look.

For the characters that hadn’t appeared in Gilliam’s animated segments I did sketches on paper, then working in OCP Art Studio drew full colour sprites of them.

So looking back, what was the overall experience of working on the game like? I really loved working on the art for the game and am still very proud of how it looked, and how using the custom tool I’d written to create lots of animated sequences for the game we managed to include over 100 references (I kept a list during development!)

But it was a really tough project for the team, and I’ll always be grateful for all their patience with me throughout the project. The problem we were facing was adapting this game and the path through it was never obvious, so we explored a whole bunch of dead ends, particularly because the remit had been to make something different than we’d done with Rick Dangerous. I spent a lot of time shuffling back and forth trying to find the answer to what the game actually was, and with a team of guys trying to help me get to that while also balancing the feedback from our publisher.

In the end, we agreed a plan out of it – I took the whole game home and for four solid weeks, working 24/7 I designed the levels, all of the art, created all of the animated sequences, delivering a package to the guys in the office to then spend a week implementing it on their formats. It was far from ideal and absolutely exhausting, but it got the game finished for us, allowing us all to move on to new projects.

Blimey! So – are you happy with how Monty Python turned out? As I say, I’m happy with the artistic achievement and how we managed to make something that is so ‘Python‘ that wasn’t a handful of mini games. But, I still wished we could have had a crack at Dredd….CF

Commodore Format really lived Python in its review – printing the text upside down and providing an explanatory diagram showing how to hold the mag in order to read it: