This issue had a subscriber’s newsletter. Read it here.  Read the accompanying Power Pack feature March, 1993. The Great Storm stretched from Canada to central America, leaving over 7cm of […]

March, 1993. The Great Storm stretched from Canada to central America, leaving over 7cm of snow in some areas. A third Teenage Mutant Ninja Turtles movie was in the cinema (though the franchise was waning), and Oh Carolina by Shaggy was number one in the UK music charts.

And in C64 world? Batman Returns! Or does he? This month’s exciting  cover of the Dark Knight of Gotham City was one of the most striking in ages, and the news that Konami would be releasing something on C64 – pretty irregular – was great to hear too. Roy Bannon of Denton Designs, who’d most recently worked on World Class Rugby for Audiogenic, had been signed up for the lion’s share of the work. The limited preview CF had this month suggested that the game was a beat ’em up/platformer of sorts, with Batman able to wander both left, right and head for the rooftops. The code Commodore Format saw had no enemies, but Batman himself had a “bewildering range of moves” and the sprite apparently animated wonderfully, with the hero’s cape fluttering down behind him as he jumped, for example.

We’re going to have to show you the Amiga version here, which Roy was converting from, because in the end CF had given the front cover to a game that wasn’t released:

“Batman Returns was canned because the powers that be decided the C64 was no longer a commercially viable product. In other words no-one thought they could make any serious money out of it. The game itself never got past a couple of demos for Konami.”

So what was complete?

“If you’ve seen the Amiga version,  then the C64 was complete to the first level and had a largely complete second level. Development never got beyond that point although of course a lot of groundwork had already been done in terms of animation systems and the rendering of Batman and baddies, missiles etc.”

If you take a look at the Amiga vid, there’s nothing present that wouldn’t have been possible on C64. It’s a high-profile casualty of the machine’s sharp decline in ’93, and wouldn’t be the last. D’oh! (Read more and see pictures of the game at Games That Weren’t. With thanks to Frank Gasking – Ed) 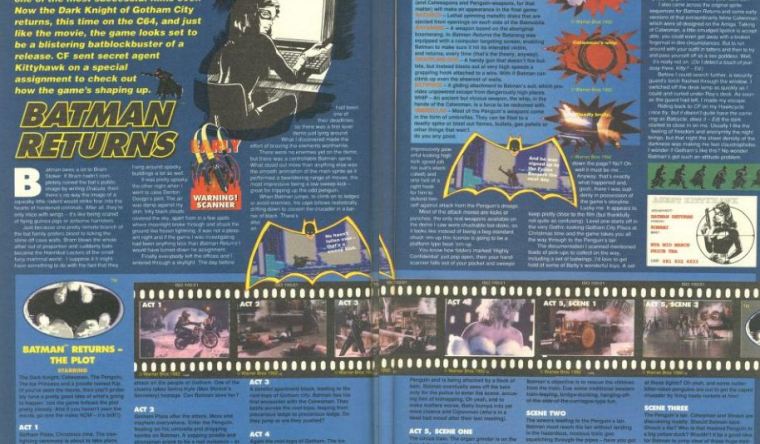 IT WAS A GOOD MONTH FOR GAMES THOUGH

March 1993 wasn’t bad at all, actually, with nine new releases given the full Power Test treatment. Addictive’s Football Manager 3 was “massive, addictive” and clocked in at 84%, offering serious depth over its rivals. Zeppelin’s overhead racer Carnage is probably the other standout game, which is good but not Slicks good – it notched up 73%. Roger Frames went fishing this month, and before his inevitable fall into a canal got to play re-releases of Terminator 2 and Heroquest for £3.99 each. So, a seriously good month for games and with more to come as well: this month’s previews flagged up McDonaldland (which looked like Mario) and what would turn out to be Ocean’s last ever C64 game, Sleepwalker (which looked like nothing you’ve ever seen before). We’ll come to both in the next few installments of  this series.

The magazine’s story didn’t push forward very much this month. It just did what it does best, including another cracking Face To Face. This time it was Ken Lockley of Ocean who took questions from readers. Most interestingly, he revealed that Ocean got its name after the building it was based in: it had previously been owned by famous shipping magnates. John and Steve Rowlands were on hand again, too, checking in with their progress on Mayhem In Monsterland: all of the game’s components were now complete, and they’d spent time putting together test levels. The maps that snake their way along the bottom of the page are mouth-watering: already, it was obvious Mayhem was going to be special.

We’ll leave you this time by, conversely, going back to the start of the magazine. Trenton’s editorial this month asks everyone to fill out a survey to help give CF “an even finer edge”. Save a few smaller changes, the mag still looked as it had two-and-a-half years ago. By now, the C64 had changed. And it would soon be time for Commodore Format to as well. CF

Re-Bounder was the follow up to Bounder, which had made an appearance on issue 4’s tape. As a tennis ball, you avoided the voids until the end of the level, and damned fun it was too. Slayer was a horizontally scrolling shooter with the usual aims, Daedalus was the same but did its business vertically. The tape was competed with a couple of bits of PD: the utility Music Maker and a Blackjack game. Read our feature about this month’s tape here.