A look at the January 1995 issue of British C64 magazine, Commodore Format.

The fifty-second issue of Commodore Format is cheekily nicknamed “The Phoenix” (it’s in the credits panel). As you’ll remember from last time, media group Pearson bought Future Publishing at the tail end of 1994. One of its first acts was an immediate downsizing of CF from issue 51, and there is evidence to suggest that if the December ’94 issue hadn’t sold well enough the magazine would have been closed. (Want to read more about this? Here’s last month’s feature – Ed)

Anyway.  It did do well enough and the January 1995 Commodore Format was a much better use of the very limited space. December’s magazine had clearly been cut to 22 pages in a hurry, and as such we just got the “old” style magazine without enough room in which to do it justice. Issue 52 was very different, with new editor Karen Levell (officially credited for the first time, though still not formally introduced) offering up a mix of genuinely useful articles covering stuff CF hadn’t touched before.

The cover story was dedicated to C64 utility GEOS, which essentially allowed you to turn your Breadbin into a Windows style environment. The limitations are obvious, and it’s also disk only, of course – which left it out of the reach of most kids in the UK. That’s not to be disparaging of the software itself: GEOS is thoughtfully designed and has a bunch of nice utilities to go with it, all of which CF would be covering in the coming months.

The serious theme continued over the page, with a look at a couple of disk drives you could buy if you wanted to soup up your ’64 (and, yes, use stuff like GEOS).  This month it was the turn of 3.5″-ers (oo-er, etc – Ed). Like GEOS, they were impressive – but at a start price of £159 (more than a SNES)  it was only the hardcore who were going to go near them.

On the opposite page is perhaps the most interesting feature of the month, at least in terms of the decision to cover it at all. Sean McManus took a look at a C64 emulator for the PC, which was the second admission in as many months that the Commodore was looking at a retirement (in December, Simon Forrester had said precisely as much in C64 versus The World). The tone of 1995’s CF was already very different to that of Hutch’s magazine a year earlier; there was no fantasising that people were choosing a Commodore over more powerful machines; rather, a grown-up observation that the C64 existed in its own right and that people enjoyed using theirs irrespective of whatever else they did – or didn’t – own.

The only mention of games (outside the tips section) is an update on Jon Wells’ Tenth Dan, the diary of his beat-’em-up which remains unreleased to this day.  As we’ve mentioned in previous installments of this series. the “games explosion” of the previous summer was really an idea manufactured by Dave Golder to generate some excitement; most of those games from Europe hadn’t arrived, or had sold poorly.  This was the month CF became utterly unrecognisable from the games oriented heydey; it was the start of the slide, as final editor Simon Forrester remembers, into the “fanzine model” that would ultimately seal its fate: a mix of hardware roundups, retrospectives and tutorials. But let’s remember the achievement here: 1995 was the year of the Playstation, Goldeneye and Oasis vs Blur. That CF was around at all was astounding, and seem even more so with every passing year. And it wasn’t over yet! CF 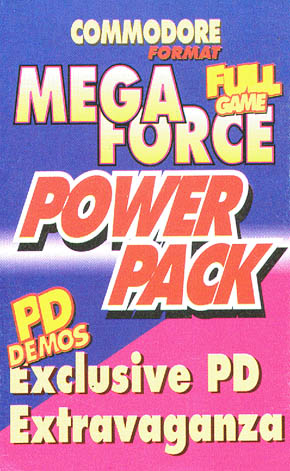 Just the two items on this month’s tape, the smallest offering to date: both came from Paul Kubiszyn. The lead game was futuristic tank blaster Mega Force. He spoke to us about the tape exclusively:

“Commodore Format issue 52 holds a very special place in my heart, as Mega Force (for all its faults) was my first professionally published game.  I admit the game wasn’t fantastic as I was really rushed to complete it. Unfortunately CF managed to publish an old version of Mega Force which featured a nasty bug that would cause the game to freeze at random points. If memory serves me correct, I recall being paid £150. This was good money for a 17-year-old job seeker. Struggling to fill the remainder of the Power Pack, Karen asked me if I could come up with anything else. At the time I was working with my good friend Jonathan Hunt on a technology to convert images from the Acorn Archimedes to the C64. We had come up with a nice way to get 4 colour Grey scale bitmaps at a resolution of 320 x 200 pixels (double the horizontal C64 standard of 160 x 200). Our technique, IMAP as we called it; used a form of pre-calculated interlacing which gave us virtually 99% remaining processor power to do with as we pleased. As time was of the essence, we ported the pictures and handed them off to Ewen Gillies of the Electric Boys. His job was to package them up neatly into a few short demos to fill out the remainder of the tape. The result was the Exclusive PD Extravaganza.”